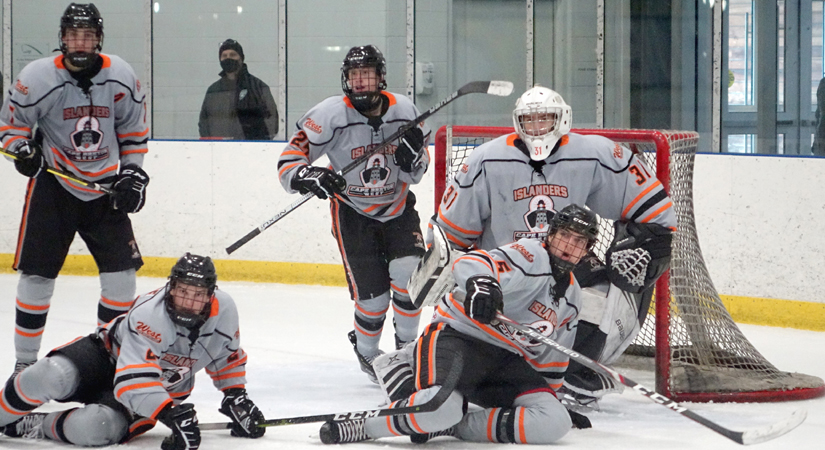 It was all hands on deck in the final minutes of Saturday’s 4-3 win by the Cape Breton West Islanders over Pictou at the U18 Major Showcase tourney. Helping goaltender Jack Milner preserve the win are forwards Lowell MacDonald and Marcus Larade, and defencemen Keir Jordan and Cody Van de Sande.

Three league games, three one-goal games, one win.
Not the outcome the Cape Breton West Islanders were hoping for heading into the U18 Major Showcase tournament held in New Glasgow on the weekend.
On Friday, against the Valley Wildcats, the Islanders gave up two shorthanded goals and got called on two too many men penalties, all leading to a 4-3 loss.
The Islanders did push back in two games on Saturday, playing a solid 60 minutes for a 4-3 win over Pictou County Weeks and then getting edged 3-2 by the Dartmouth Steele Subaru.
“Friday was not our day,” said Islanders defence coach Kyle Gillies. “We made a lot of mistakes and everyone was held accountable.”
The Valley led 1-0 and 3-1 by periods, with the Islanders goal scored by Lowell MacDonald on the powerplay with an assist from Sam Beaton.
The Wildcats went up 4-1 in the third before goals by Marcus Larade (unassisted) and Ray MacKinnon from Landon MacIntosh made it a one-goal game.
Shots were 33-28 in favour of the Islanders with Adam Tkacz in goal for the loss.
Saturday was another day and Gillies said the team shoved Friday into the past.
“We outworked Pictou...not that we lack skill but the work ethic was there. When you have a bad game, it’s the bounce-back that you look forward to and we were very pleased with the effort.”
The two clubs battled to 2-2 and 3-3 period ties in a highly entertaining game.
In the first period, Cape Breton West came back twice to keep the game even, with goals by James Beaton (Sam Beaton and Lowell MacDonald) and Rory Wood (Ryan Hayes and Sam Beaton).
Pictou thought they took the lead again a minute into the second period but the goal went in on a delayed penalty and was disallowed.
The Islanders took their first lead of the game at 8:59. With defenceman Liam Trenholm in deep on a forecheck with Kevin Walker on the right side, the puck went to the left side of the ice where defenceman Cody Van de Sande took a shot that found its way through the goalie’s gear, trickling into the net.
Unfortunately for Van de Sande, he was in the cooler when Pictou came back to tie the game with a powerplay goal at 14:38.
The 3-3 tie held until 8:23 of the third when Trenholm delivered a chip shot from the blueline that found its way into the hole through traffic, with Van de Sande and Larade picking up assists.
Pictou turned up the pressure in the dying minutes, and after a time out at 18:56 and with an extra attacker, a shot dinged off Jack Milner’s post but stayed out and the Islanders held on for the 4-3 win.
Milner faced 33 shots for the win in goal.
In the 5 p.m. game, Dartmouth took a 1-0 lead in the first and both teams traded goals in the final two frames in the 3-2 loss.
“It was a classic West vs. Dartmouth game, back and forth and hard hitting,” said Gillies. “Just as Jimmy Beaton led us against Pictou, Lowell MacDonald was outstanding in that game. These players have a great effect on the people around them.”
MacDonald scored the Islanders’ second-period goal on a play with the two Beatons.
Bryce Thomson made it a one-goal game late in the third, with James Beaton and Keir Jordan assisting.
Shots were 30-27 in favour of Cape Breton West, with Tkacz in goal for the Islanders.
“It’s hard to get mad at the group when the effort is there, and it was against Dartmouth. They have the potential to do something special this year and they know it,” said Gillies.
The assistant coach also tipped his hat to trainer Stephen Graham.
“He’s been a great addition to the team, a perfect mix of old school with currently available information on training. It’s not just a physical workout that he provides, but a mental workout as well.”
The Cole Harbour Wolfpack, who had to pull out of the Showcase tournament following the positive tests for COVID-19 that showed up at Auburn Drive High School, are scheduled to play in Port Hood this weekend.
In an email sent by the team on Monday, the games are still on at the Al MacInnis Sports Centre for Saturday at 6 p.m. and noon on Sunday.
Only spectators with season passes or advance tickets will be admitted and this includes seniors, adults, students, and children under 12.
Advance tickets are available by calling the arena at 902-787-3210 on Wednesday, Thursday, or Friday, between 9 a.m. and 4 p.m. Media and scouts must pre-register before 3 p.m. Friday.
Doors for spectators open at 5:30 p.m. on Saturday and 11:30 a.m. on Sunday.