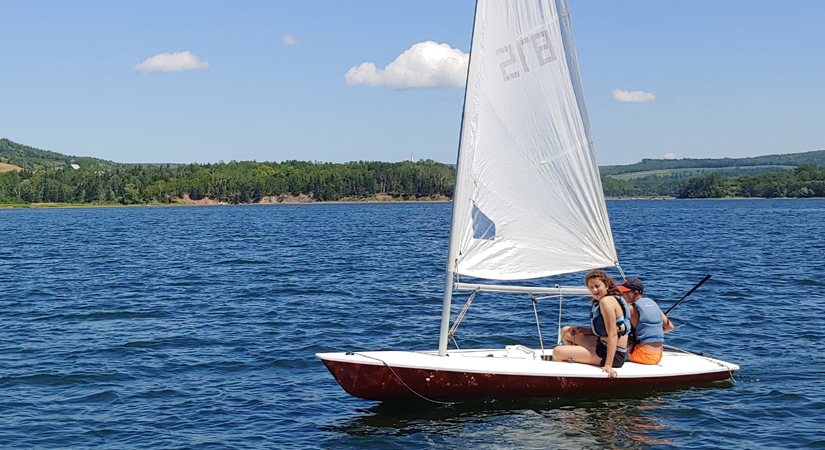 Is there anything better than sailing on a beautiful summmer day in Cape Breton?

The Mabou Sailing and Boating Club is seeking new sources of funding so that the popular sailing program can continue in the summers to come.
“It’s tough to run this program with limited funding, we have demonstrated that it’s a good program, we sell out every year since it began, I think it needs support and it deserves the support,” said club manager and director, Danny MacDonald.
Beginning in 2012, the club has committed to the development and sustainability of a recreational boating club for youth and adults in and around the Mabou area. The club has grown steadily each summer with many kids registering for the Learn to Sail program, a program which teaches the basics of sailing to youth between the ages of eight and 16.
This year, because of COVID-19 restrictions, the program had to be changed from past years.
“This year, we reduced the capacity, the class size, and the duration of the whole program, normally it would be six weeks long, but we reduced it to four,” said MacDonald. “In some aspects, this really was one of our most successful years, just because of what we had to overcome, we had a really good relationship with Sail Nova Scotia, they gave us a lot of help in terms of following the COVID-19 regulations.”
“There was a lot of uncertainty if we could run it (the program) or not, but things really came together for us, we got sport funds from Sail Nova Scotia, we got two local girls who were home because of COVID to be instructors, they were really keen to run the program, they really convinced me that we could do it...the guidance from Sail Nova Scotia was a big part too,” said MacDonald.
Fortunately for the Mabou club, MacDonald was able to purchase some brand-new boats from the recently closed Mira Boating Club. Despite this somewhat lucky timing, MacDonald claims without the closing of the Mira Club, the Mabou sailing program may never have been able to open this summer.
“We need a lot more money to survive,” said MacDonald. “It’s a fledgling business, it’s a nonprofit (program) that’s run by volunteers and we have a shoestring budget that barely survives every year,” said MacDonald. “We just raise money through program fees and we get help from Canada Summer Jobs to hire the students, but without that we couldn’t exist, and it’s getting harder every year to make it happen because with the learn to sail program, a big part of it is boat maintenance, these kids are learning to sail, when you are learning to sail, you’re gonna break the boats, not intentionally but it happens; and sail boats are not cheap.”
MacDonald says in past years, the Mabou Sailing and Boating Club has received funding through Sail Nova Scotia and occasionally from the Cape Breton District Health Authority. As well as from individuals who have donated boats, equipment, and even cash.
“Over the last five years, we were able to operate on a slim budget because the boats were in good shape, but now because the boats are getting older, the structure is not great. The program is growing, there is more demand so we have to expand the structure and purchase newer boats,” said MacDonald.
MacDonald says the Mabou Sailing and Boating Club had recently proposed a plan to all three levels of government that outlined the clubs plan on ways to grow their program as well as a way to raise their own money.
“We wanted to create new revenue streams,” said MacDonald. “We wanted to put an oyster bar in the water and harvest oysters and possibly even get into accommodations, specifically for sailing instructors, we wanted to put up one cottage that the instructors could stay at. We want to try and generate new revenue streams that would allow us to become sustainable and to raise our own money. So, for the club to succeed and grow it has to create ways to make its own money and I think its oysters.”
Despite the proposed idea, the municipal, provincial, and federal governments all turned down the idea.
“I’d like to get the word out for the community to start to look at how we can keep sailing alive in Mabou,” said MacDonald. “We need a new team to come in and take over.”
The Mabou Sailing and Boating Club will wrap up their season this weekend when the program is set to be completed.
To contact the club, visit their website at www.mabousailing.com for further contact information.