Margaree pays it forward with delivery of fire truck 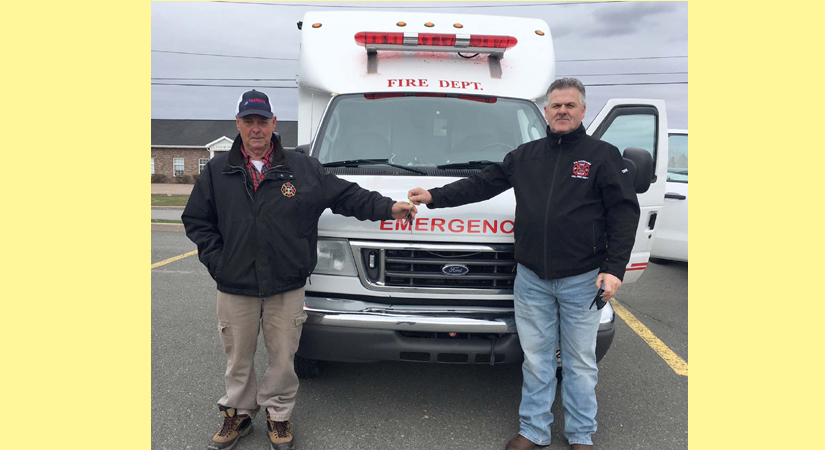 When the Shinimicas Volunteer Fire Department’s hall went up in flames on April 23, the small Cumberland County brigade lost everything they had – three trucks, all their turnout gear, Jaws of Life equipment, their radios, the community’s only hall – everything.
The next day, a pumper truck from nearby Tidnish was in the community on loan and the outpouring of support hasn’t stopped since.
Last Thursday, the North East Margaree VFD became the latest department to pitch in by loaning Shinimicas an equipment van that was put out of service last year when it bought a new one with its Chase the Ace winnings.

“I wouldn’t know where to begin if we lost everything,” said NE Margaree chief Shawn Burchell. “We had the van up for sale, but it sat all winter with no takers. So, we went to the members and the majority said yes, we’ll lend it to them for now.”
Burchell said they had the van checked out at the garage to get it ready for Thursday’s delivery, meeting up with two members of the Shinimicas department in Antigonish.
“They were quite happy to have it,” he said. “It’s theirs for as long as they need it and if they want to make us an offer down the road, we’d be willing to sell it for less than we’re asking for it.”
Burchell said the NE Margaree department is in good shape.
“We had our wealth come in (with Chase the Ace) and we bought all new gear. Our oldest truck is a 2000 and our other trucks are 2013, 2018, and 2019.” The brigade had also donated a surplus tanker two years ago to Port Hood, which is now on Port Hood Island.
Shinimicas deputy chief Matt Mundle said he and chief Jesse Brine have been putting in 16-hour days since the fire, sorting through the many offers of equipment and preparing the insurance claim.
“There’s been a lot of bad news in Nova Scotia and people are at the point where they want to do something. It’s pretty heartwarming and encouraging with so many departments reaching out to us from all over,” said Mundle, noting the department has received offers from all over Nova Scotia, PEI, New Brunswick, and all the way from Pennsylvania, Ottawa, and Toronto.
“If we said yes to everybody, we’d have enough equipment to outfit 20 departments!”
He said the day after the fire, with the pumper from Tidnish in the community, the brigade had to respond to two grass fires – despite the province-wide burn ban.
“There were half-a-dozen of us at the hall when the call came in. We had a good response and got the fires out, but we had to break into the property owner’s shed and steal their shovels,” Mundle said.
Since then the brigade has received turnout gear for its members from a company that refurbishes old gear. The bunker suits are past the 10-year recommended service life, but are still in good shape. It received Self-Contained Breathing Apparatus (SCBA) and tanks from Merigomish and Micmac Fire and Safety Ltd. Code Four Rescue Ltd. has loaned them a complete Jaws of Life set. And Hantsport has loaned them a tanker truck.
“We are so thankful for all the support we’ve received,” said Mundle. “And we’re very thankful that the insurance the Municipality of Cumberland County had is for full replacement costs. What happened to us is a terrible thing, but in two years or so we’ll be back in business with our own gear.”
Mundle said another positive that might come out of it is a greater appreciation of the service a volunteer fire department provides and hopefully encourage young people to join.
“When I was a kid, my high school burned in Pugwash and that had a lot to do with me joining,” he said. “It was heartbreaking just to stand there and watch our hall burn. That hall was built by the hands of the firefighters – a lot of pork chop barbecues went into it.”