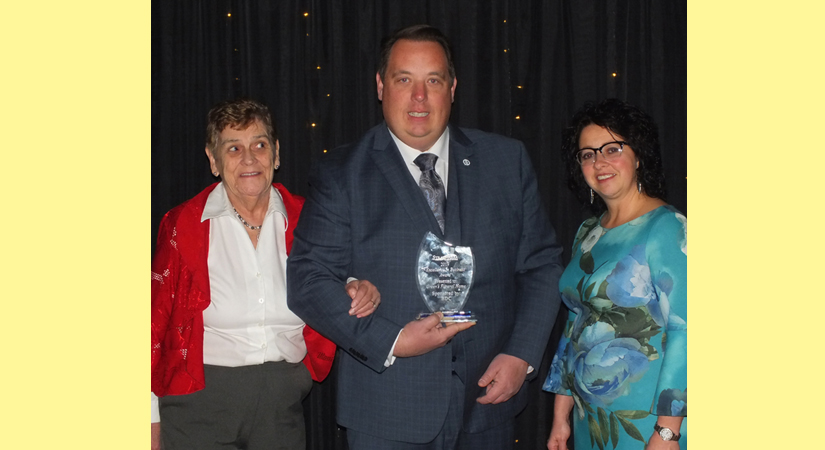 Top honours of the evening went to Green’s Funeral Home accepting the Excellence in Business Award. Green’s Funeral Home was started by owner John Green in August 1999 on Bernard Street in Port Hawkesbury in the former Rod MacDonald Funeral Home. At the time, John was a young apprentice with just a few years experience in the funeral profession when he leapt into entrepreneurship with both feet. As the business grew, John maintained a commitment to providing the highest quality service to families and loved ones; remodeling and eventually expanding the facility on Bernard Street, adding pre-need service, and broadening their service area to include the entire quad-county region. Green’s Funeral Home is an excellent example of how small businesses can succeed in rural Cape Breton! Pictured here is long-time employee Catherine Cogswell (left), the late John Green, and The Strait Area Chamber’s Diana Martell.

It is with shock and sadness that the communities of the Strait area and western Cape Breton learned of the sudden passing at home of John Green on Tuesday.
A prominent community member and businessman, Green was the recipient of the Strait Area Chamber of Commerce’s top award during its annual Fall Dinner and Awards Gala held last Wednesday evening at the Port Hawkesbury Civic Centre.
Green, who was 41, opened Green’s Funeral Home in 1999. In 2016 he served a term as president of the Funeral Service Association of Canada. He also had an interest in politics, running for election provincially with the Progressive Conservatives in 2006 and 2009, as well as for Port Hawkesbury town council in 2012.
Funeral arrangements will be announced at a later date. The following is the article written for the awards gala and highlights the qualities Green possessed as the recipient of the prestigious award.
Upon accepting the award, John Green thanked his dedicated staff and his father for believing in him enough to back him when he purchased the business at the tender age of 21.
Green said his father still plays a key role in the business by helping his customers and families in their time of need.
Green also encouraged everyone in attendance to take the time to volunteer in their communities, crediting himself with becoming the person he is today due to the early volunteer hours he spent with the Port Hastings Volunteer Fire Department, a committment which he maintains until this day.
Amanda Mombourquette, executive director of the Strait Area Chamber of Commerce noted, “For the second year in a row, the record has been broken for the number of businesses nominated for the Rising Star New Business Award. The spirit of entrepreneurship and innovation is stronger than ever in our communities!” The Strait Area Chamber of Commerce is committed to recognizing business achievements, and to fostering business connections across the region.
This year’s Rising Star New Business Award was granted to Coastal Cleaners Inc. of Inverness. Owners Amy MacDonald and Diana MacKinnon credited the support they receive from supportive family members in launching their successful new business, especially through the challenging balance of business and family commitments.
Budd Williams of the Town of Port Hawkesbury Public Works team took home the Safety Champion Award this year and he thanked his fellow employees for the help they provide in encouraging a safe work environment daily.
The Strait Area Chamber of Commerce 2018 Fall Dinner and Awards Gala was sponsored by Port Hawkesbury Paper, NuStar Energy, Nova Scotia Business Inc, Business Development Bank of Canada, InRich CBDC, the Workers’ Compensation Board of Nova Scotia, MacLeod Lorway, the Cape Breton Partnership, 1015 The Hawk, and Sound Source Pro Audio.
With over 370 members, the Strait Area Chamber of Commerce is a not-for-profit business development organization that promotes, improves, and protects trade and commerce; ensuring that the Strait area is one of the best regions in which to invest, live, work, and conduct business.
The Outstanding Customer Service Award went to Justine Carter of CSN Hughie’s Collision Centre in Port Hastings.
Club 50 inductees included Albert J. MacDonald Construction Limited and EMM Law.
Club 25 inductees included: Cape Breton Realty (Sherry MacLeod), Canadian Pioneer Estates, PE Appliance Repair, Ron and Joanne Schmidt of Galloping Cows Fine Foods in Port Hood, and The Greenhouse Co-op’s of St. Peters (Connie Debbie MacDonald, and Carol Dixon-Nightingale).
Amanda Mombourquette spoke about a new award presented at the event by the Cape Breton Partnership. It is the Marc Dube Innovation Award. Marc Dube was the development manager at Port Hawkesbury Paper when it was reopened by parent company Stern Partners following a difficult period of closure. The Inaugural Award was presented to Blaire Martell of Lobsters ‘R’ Us Seafood.
The Cape Breton Partnership’s Carla Arsenault and Inverness County CAO Keith MacDonald spoke highly of Mr. Dube, who had engaged with business and community leaders in a leadership role throughout the region during his time in Cape Breton.
They welcomed Marc’s family: sons Ryan Dube, Graham Dube, and Marc’s wife Veronica Dube, who traveled from their home in Ontario to be part of the ceremonies.
“Marc Dube’s innovative, professional, and compassionate approach to his work and community had a deep impact on the region, and volunteered with both the Chamber and the Cape Breton Partnership,” Amanda Mombourquette noted in her comments following the event.
The Marc Dube award recognizes a business, organization, or person who has demonstrated an unwavering commitment to innovation and business success.
“The inaugural recipient of the Marc Dube Award is Blaire Martell of Lobsters-R-Us Seafood located in Little Harbour. Now providing storage for one million pounds of product, Lobsters-R-Us is touted as the most-highly automated seafood storage facility in Atlantic Canada,” Mombourquette noted.
Earlier in the evening, The Export Achievement Award was presented to Glenora Distillery. Wanda MacLean of Nova Scotia Business Inc made the presentation to Glenora Distillery President Lauchie MacLean.
MacLean spoke of Glenora’s success in new markets such as Russia, Ukraine, and eastern Europe and he noted the importance of providing a welcoming environment for tourists as a key role in developing tourism and your export markets.