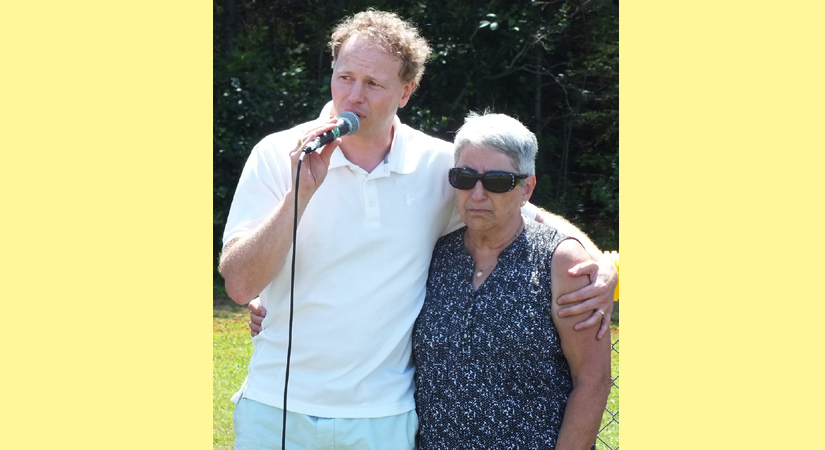 It was a special and emotional day in Judique last Saturday afternoon as many from the village and the surrounding communities came out to pay tribute to a mover and a shaker in the field of sports and education.
At 1:00 p.m., following a colourful parade through the community, a group of spectators gathered at the site of the new ball field to witness the official opening of the Leo A. MacDonell Recreational Complex.
What a beautiful and important asset to the community of Judique!
Emcee Morag Graham said she would keep the dedication to Leo A., as he is fondly remembered in his home town, short and sweet.
“We are fortunate to have an amazing ball field,” said Graham as she acknowledged the work of Sheldon MacDonald, who successfully advocated for the field from The Blue Jays Care Foundation.
Graham said the next step in the development of the complex is to construct a playground and they hope to be able to break ground before the end of the summer.
Graham thanked her committee and Jeannette MacDonald for “making so many trips back and forth to Halifax and Antigonish.”
“It is fitting that we name this complex after Leo A. – educator, coach, community volunteer, and one who always strived to better our community,” Graham said.
MacDonell was one of those responsible for the ball field, the track, and the tennis courts.
“MacDonell felt that it was a privilege to work with young people and at the same time, a great responsibility,” said Graham.
MacDonell family members in attendance then came forward to officially unveil the sign and the scoreboard named for Leo A.
“This is one day I wish that Leo was here, but I’m sure he’s here in spirit,” said his widow, Yvonne MacDonell.
“About nine months ago, John MacInnis came for a visit and told us about the JRA grounds and what was being done here, and so we didn’t take very long to get in the car, which was very hard for him (Leo) to do and we sat there in the car for a long time. Two days later he said, ‘take me back to the grounds,’ which we did, so I want to tell you that he saw this beautiful field and he was impressed,” said Yvonne.
Yvonne thanked Morag Graham and her committee for doing such a job and everybody else that had any hand in doing this.
“It’s beautiful and thank you very much!” said Yvonne.
MLA Allan MacMaster noted that many of the MacDonell family travelled far and wide to be there for the occasion saying: “It’s always great to have you back in Judique.”
MacMaster welcomed those in attendance and asked anyone to raise their hand who was taught by Leo and everyone whom he made a difference for in sports, education, or with these grounds. It was evident that Leo A. had touched the lives of so many in attendance and he will be fondly remembered.
“I always knew very well that Leo A. was a real leader in the community,” said MacMaster and the MLA recalled the big track meets, the tug-of-war team, a provincial winning hockey team in 1978, and the introduction of soccer programs in the community, all thanks to Leo A.
“I can think of another team that made a great mark in this community and that is Leo A. and Yvonne. Thank you for giving Leo to us and for supporting him and look at all he did for us,” MacMaster concluded.
Bob MacEachern recalled many mornings when Leo A. would be up early doing something that needed to be done in the community and he remembered that Leo wasn’t shy to ask for help or assistance.
“In so many ways, Leo meant so many things to so many people. He had his big, big fingerprints (on so much) in this community. One thing I remember is that when Leo often asked of people in the community he never asked for Leo A.; it was always on behalf of the community. He had a vision for what the community could be long before the rest of us did. Putting his name on this allows us to tell the next generations who he was, what he meant, and how he transformed Judique into a centre of excellence in sports. He was the epitome of Judique. He loved Judique with all his heart and over the years he felt he got a bit of that love back,” MacEachern concluded.