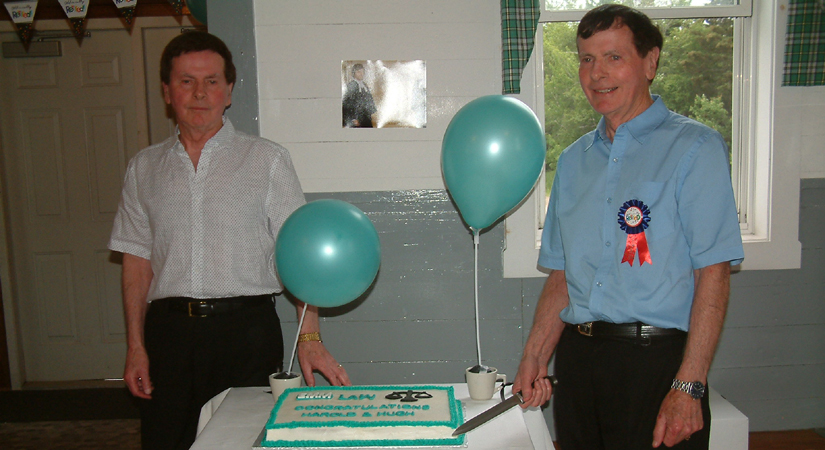 On Friday night, they returned to Glencoe to say their final farewells to two of the most-admired lawyers Inverness County has ever produced.
Harold and Hugh MacIsaac, the twin lawyers, were joined by family, colleagues, and friends at the Glencoe Mills Hall for a retirement dinner, and of course, a square dance.
Emcee Patrick Lamey welcomed everyone to this “wonderful celebration” saying, “You don’t see this everyday!”
Harold and Hugh were raised on the banks of the Mull River in Glencoe, educated in their community and in Judique, and after many cords of pulp finally received their law degrees from Osgoode Hall at the University of Toronto.
Father Bernie MacDonald, in saying grace, spoke of the important milestone and asked God to grant them long lives and much more happiness in their retirement.
There were congratulations from the Dean of Osgoode Hall.
Larry Evans, who “shared most of the memories,” spoke of the two outstanding legal minds who graduated in 1973 (Harold) and Hugh (1974), apparently Hugh cut more pulp to give them extra funds for the journey into law.
Evans said it was a great day when both of them accepted an offer from the firm of Doucet, Davidson, and Kelly in Port Hawkesbury.
Over the next 45 years, they would establish successful careers and firsts.
Harold became the first and last lawyer to be accepted to the bar outside of Halifax at the courthouse in Port Hood.
In 1982, Harold and Hugh travelled to Ottawa to argue a case before the Supreme Court of Canada and it was the only time a lawyer from the firm appeared before the Supreme Court.
One of the justices remarked that it was the only time that twins appeared before the Supreme Court to argue a case.
Evans said with their litigation representing the people of our area, it brought a new reputation to the firm especially in the field of insurance law.
He said people felt comfortable going to the twins from Glencoe.
After Doucet and Kelly left, it was Evans, the MacIsaacs, and a young lawyer by the name of Wayne MacMillan who steered the course of the firm.
“For almost 40 years I have admired their work ethic and their commitment to providing excellent service to all of our clients,” he said.  “They have been key players in helping to make EMM LAW Inc. a well-respected firm.”
Patricia, Harold’s daughter, said she hopes this day is as memorable as all the others and that their success came from the sweat of real hard work, which they did to improve the lot of those who live around us.”
She said her father will now whistle Amazing Grace only at home.
Chief Rod Googoo of Waycobah First Nation said Hugh was “one of the most decent human beings I ever met” and “I was so happy to have had the opportunity to know them. They served my people well.”
Wayne MacMillan echoed what everyone who knows them was saying, that they were always models of ethical behaviour and integrity.
The twins spoke of their future days, in which they will have to fill with things of interest and of days gone by when they and their father took four weeks to run a water line from the well into their house. They couldn’t make it work until their father blew the air out of the pipe.
“I fill the coffee machine,” Harold said. “Who is going to do that?”
And who will be in charge of the thermostats now that Hugh is gone?
The firm is in good shape and growing, but the MacIsaacs will be missed in the legal fabric of the Strait Area and beyond.
They thanked all the people who helped them gain success over the past 40 years.
And, as they said, “We are not retiring from life, just graduating.”