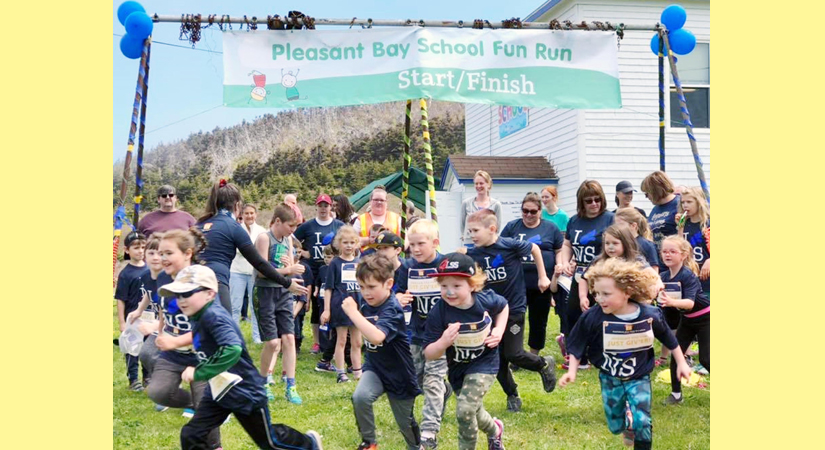 Ashley Crowley and her students worked hard to get to this moment. They began training earlier this year in the basement of the school. When the warmer weather came they moved their training outside. With help from the Blue Nose Marathon organization they had bibs and official medals for everyone who crossed the finish line. Centre of the photo is teacher Ashley Crowley.

Last Friday, 110 students from the some of the most remote schools in this province took part in the annual Blue Nose Marathon.
What’s more interesting is that they ran the race in Pleasant Bay.
Pleasant Bay is the Strait Regional Centre for Education’s smallest school with just eight students and one teacher.
Ashley Crowley is the teacher of the one-room Pleasant Bay school and it was her idea to train, prepare, and then to sign up her students (and invite others) to join in a Virtual Run of the Blue Nose Marathon, which takes place annually in Halifax.
“Running is something we can do here at Pleasant Bay School,” explained Crowley, stating that their school does not have a gymnasium, just a classroom and a basement for limited recreational and fitness activities.
Crowley got the school involved in the Kids Run Club; a free, school-based running program created by Doctors Nova Scotia.
In the winter, she taped four lines on the floor of the basement to make lanes so the children could run back and forth and count their “laps”. Now, with the warmer weather they run outside.
“Sixty-four students came from North Highlands Elementary; they would be students from Ingonish and Neil’s Harbour, and the rest came from Cape Breton Highlands [Education Centre],” said Crowley.
“They all came to Pleasant Bay and we even shut down a street with the help from the RCMP and the Pleasant Bay Volunteer Fire Department (PBFD),” added Crowley.
The Virtual Blue Nose Marathon run in Pleasant Bay was on Friday, June 7th, and the students either ran distances of 4.2 kilometres or 2.1 kilometres.
She explained that one kilometre was shut down by RCMP and the other by the PBFD. “The kids would run down one street, which was a measured kilometre, and back again, and some would run it twice.
“There and back was 2.1 km and running it twice was 4.2 km,” said Crowley.
The age of the students ranged from a pre-primary student to grade six students.
Two teachers from CBHEC/A ran with the students and acted as running coaches; they were Myra Muise and veteran marathon runner Andrew Clarey.
The spirit of the event was infectious and saw teachers from North Highlands, CBHEC/A, local parents, friends, and many members of the community also joining in the race.
When asked where she got her inspiration to organize this event, Crowley said that last year the students did the Fiddlers Run in Sydney and that was such a hit with the students that they have created a bucket list for themselves.
“On Friday we knocked another goal off our bucket list,” said Crowley.
“Running is the best exercise for our small school,” she said.
Crowley said that she had reached out to the Blue Nose Marathon organizing committee and inquired about making an event – a virtual run, in Pleasant Bay.
“They were amazing, so helpful, they sent us promo codes, which helped us to get everybody registered and everybody who crossed the finish line got an official Blue Nose medal,” said Crowley.
“They also sent us official numbered bibs and t-shirts,” she added.
The weather cooperated on Friday for the students, as well as for the participants in Halifax over the weekend where thousands of runners took part in the 16th annual Scotiabank Blue Nose Marathon.
The event, spanning four days, hosted seven fitness events, the largest Active Living Expo in Atlantic Canada, and had participants raising funds for local charities through the Scotiabank Charity Challenge.
Located in Halifax on Saturday, June 8th, and Sunday, June 9th, the event welcomed nearly 11,000 participants, to one (or two in some cases) of seven fitness events: the Doctors Nova Scotia Youth 2km and 4km Run, the Lifemark 5km – which also hosted a Competitive Wheelchair Division (Saturday), the GoodLife Fitness 10km, the Boyne Clarke LLP 15km, the Medavie Blue Cross Half Marathon, the Killam Marathon Team Relay, and the Scotiabank Full Marathon (Sunday).
The Scotiabank Blue Nose Marathon has become one of the most important fundraising events in Nova Scotia through the Scotiabank Charity Challenge, which raised funds for 61 local charitable organizations and provides direct support in the community.