CBHA Huskies in tough as hosts of boys provincials 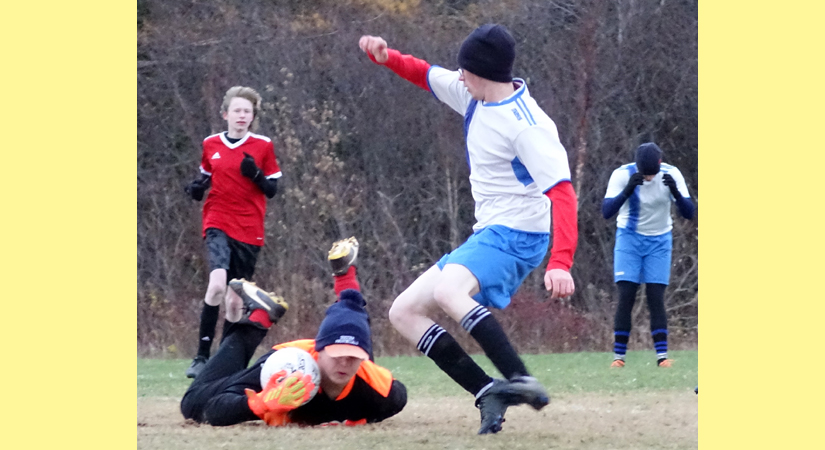 CBHA Huskies striker Dennis Ross was hoping for the ball to come loose after the AWEC keeper made a save during the opening game of the D3 boys provincial soccer tournament.

-by Bill Dunphy
Life-lessons are taught in many ways, and sport is certainly a great teacher.
The Cape Breton Highlands Huskies went into the School Sport Nova Scotia Division 3 boys soccer championship as the host team and on a high as the number-one seed.
However, the dream of glory on their frozen Terre Noire pitch was replaced with the reality of facing mainland opponents who were just a little bit better than they were.
Opening day on Friday was as bitterly cold as it gets in November with a cruel west wind coming in off the Gulf, making the zero-C day feel much colder.
The hearty young men went hard at it nonetheless.
In the opening semifinal, Sacred Heart defeated Pugwash to advance to Saturday’s final.
The opening ceremonies were held next as piper Denise Olsen marched the teams onto the field.
CBHECA vice-principal Kristen Ross emceed the event, welcoming the visiting teams and their families to the area.
County councillor Blair Phillips also spoke, welcoming everyone to the “Great White North,” noting that the week before the temperatures were in the 20s.
Huskies Wyatt Ross and Noam Chanteloup read the SSNS Athletes’ Pledge, followed by Huskies coaches Eilidh Ross and Jakob Deveau reading the Coaches’ Pledge.
Rory Timmons then sang O Canada and Kristen Ross declared the tournament officially open.
The Huskies took the field against Annapolis West in the other semifinal.
Five minutes in and Huskies keeper Jordan LeFort was tested with a high lob that he just got his fingers on to make an inspiring save.
Shortly after, in the 14th minute, Tobias Micillo scored on a hard strike from centre field that whistled through the Annapolis keeper’s hands.
AWEC tied the game at the 30-minute mark, with LeFort making an initial save, but the rebound coming back out to another attacker.
A brilliant passing play saw the Huskies take the lead once again in the 40th minute. Working to the left of the AWEC goal, Allan Chiasson feathered a pass to Chanteloup who in turn set up Micillo at the top of the 18-yard box for the score.
Nursing a 2-1 lead in the second half, the Huskies caught a break in the 65th minute when a penalty kick was awarded to Annapolis, but the shooter fired the ball over the top of the Huskies net.
But AWEC continued to press in the Huskies zone and scored the tying goal in the 72nd minute on a corner kick.
Now playing with momentum, AWEC took the lead with 10 minutes left to play, scoring on a rush down the left side and beating LeFort with a hard strike.
The Huskies were awarded a corner kick in the final seconds, but were unable to find the back of the net and Annapolis West advanced to the final.
Relegated to the bronze medal game on Saturday, Pugwash scored a first-half goal and added an insurance goal in the 79th minute to defeat the Huskies 2-0.
Despite the losses, the Huskies held their heads high and, as good hosts do, showed maturity and good sportsmanship throughout the tournament.