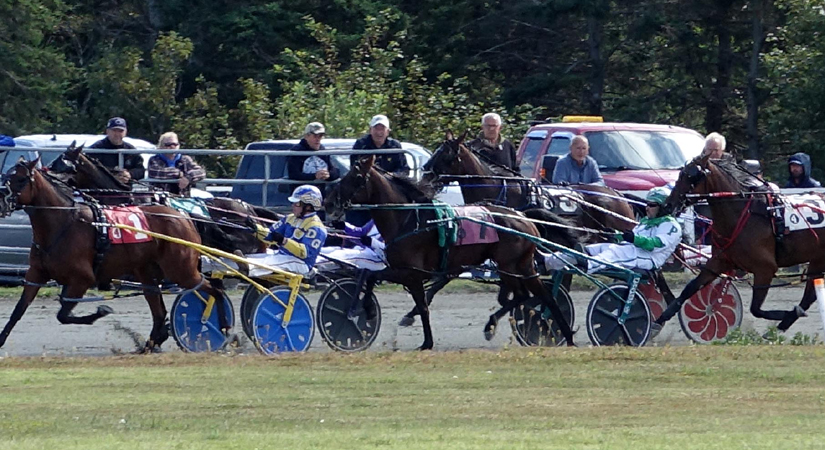 Cougar On A Terr and Danny Gillis lead the $10,220 A-division race for three-year-old fillies heading to the three-quarters, keeping Ultimate Long Shot to the outside. The two horses finished in a dead heat for first. Boo Yaya (No.3) and Redmond Doucet were also representing Inverness in the race but had to settle for fifth.

-by Bill Dunphy
Star three-year-pacing filly Therealprincess completed a sweep of her five divisional Atlantic Sires Stakes legs on Sunday afternoon at Inverness Raceway while keeping her perfect sophomore record intact through 13 starts.
Her latest conquest was a $10,220 Atlantic Sires Stakes A-division at Inverness as she took control of the field easily from the inside post for driver Corey MacPherson
JJ Scarlett, with Redmond Doucet on the reins, launched from the pocket turning for home but had to settle for the runner-up honours behind the 1-4 favourite while Tobins Diva (Gerard Kennedy) finished third after a first-over journey through the final lap.
There was a dead-heat in the other fifth leg A-division for the fillies with Cougar On A Terr and Ultimate Long Shot crossing the wire together in 1:59.4.
Cougar On A Terr and driver Danny Gillis took the lead with the inside post advantage and set fractions of :29.1, :59.4 and 1:30.1 with Ultimate Long Shot and Brodie MacPhee progressing first-over from the backfield approaching the midway mark and getting up at the end for the dead-heat finish.
Cougar On A Terr, who also won an Atlantic Sires Stakes division on Aug. 13, now has six wins from 15 sophomore starts and $34,541 banked in seasonal earnings. Trainer Walter Walker co-owns the Cougar Hall-Toxic Terror filly with the Estate of Angus Mac Innis.
The top three-year-old pacing fillies will close out their Sires Stakes season in the Atlantic Breeders Crown on Oct. 9.
In regular action, this week’s $1,950 feature was won by Thunder Alley (Brodie MacPhee), who went first-up from third down the backstretch and caught the front-striding 2-5 favourite Legendary Ron (Mark Pezzarello) at the wire in 1:57.1. Eastcoast Invader (Redmond Doucet) closed inside from the pocket to round out the top three.
Rick Beaumont trains the 7-1 upset winner, who returned $16.20. A career winner of 18 races, the six-year-old Mystery Chase gelding has won five of 16 starts this season for owner Aurolie Beaumont.
And Alex (Moose) MacDonald had his first driving double of the season, taking race three in 2:00.3 with ABs Future. Trained by Bernie MacDonald, it was the third win for the nine-year-old and owners GG Stone and Mac Stable.
MacDonald picked up his second win in race five. Parked outside fourth at the half with Eastwardho Fun, MacDonald kept to the outside to the top of the stretch to beat Junebugs Baby (Brodie MacPhee) by a head in 2:00.3.
At Northside Downs on Saturday, the win streak for rookie pacer Fishermans Son is now at five after the freshman easily handled his rivals in the lone $9,790 Phil Pinkney Memorial Stakes division.
The favourite on the board, Fishermans Son delivered on that promise, going wire-to-wire for driver Donny Gillis in a time of 1:59.3.
A son of Arthur Blue Chip - Isthatyou Ardella, Fishermans Son is owned and trained by Walter Walker and co-owned by the estate of Angus MacInnis of Mabou. In seven appearances, Fishermans Son now sports six wins and earnings of nearly $35,000.
The following are the complete results from Sunday’s nine-dash card at Inverness Raceway: