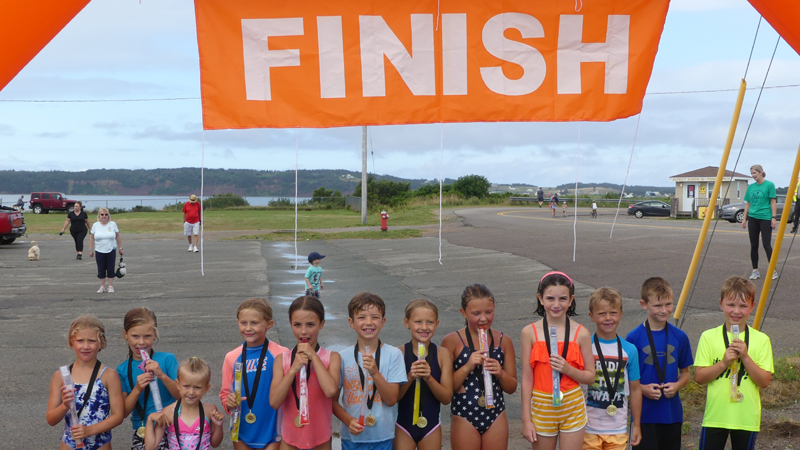 45 young athletes competed in two separate heats during Port Hood's 30th annual triathlon. Ethan MacKinnon and Lexie Brow were the winners of their respective heats Saturday morning at the shoreline in Port Hood.

-by Brad Chandler
For three decades now, athletes have travelled from near and far to the sandy shoreline of the Port Hood wharf beach to partake in what has become one of Inverness County’s premier athletic events.
The TD Wealth Port Hood Triathlon celebrated its 30th annual series of races this past weekend and continued to see athletes of all ages compete in water, on wheels and on land.
This year’s events, which took place over two days, saw 45 young athletes compete in the youth races and over 100 partake across four divisions for the main races.
“People were saying that this is one of the best races in the Maritimes. They love the hospitality, all the volunteers, the friendliness, they just love it. They always come back every year and say they will never miss it,” said race director Brenna MacInnis.
The adult race is broken up into four divisions:
The Olympic Division, which consists of a 1.5k swim, a 40k bike ride; and a 10k run. That division’s race was won by Tim Brooks from Lunenburg, who finished with a time of 2:14.50.
The Sprint division, which consists of a 750m swim, a 20k bike ride, and a 5k run. It was won by Bob Butler of Westwood Hills who completed the races three legs in 1:10.05.
Lunenburg’s Eli Brooks was the overall winner of the Supersprint division, finishing the 250m swim, 10k bike ride, and 2.5k run in 41:50.
The Supersprint Team race was won by the TD Wealth Speedsters in a combined time of 1:31.17.
Port Hood’s Coline MacEachern, who was the original race director during the first-ever Port Hood Triathlon, competed in her 30th race on Saturday morning, finishing 30th overall in the sprint division with a time of 1:48.56.
She was joined by fellow Inverness County resident Katrin MacKinnon of Port Hastings, who finished the race one spot behind in 31st in a time of 1:50.45.
Sophie Langley from Port Hawkesbury finished 4th overall in the Supersprint division in a time of 47:10. She was followed by Port Hawkesbury’s Luke MacDonell who placed 5th in a time of 49:27. Coming shortly behind in 8th place was Port Hawkesbury’s Olivia Langley, who completed the race in 51:29. Lake Ainslie’s Jill Campbell-Jessome completed the race in 13th place in a time of 58:23. Kim Talbot-Cluett of Port Hawkesbury finished in a time of 1:03.52 to round out 15th place overall.
In the youth division races on Friday morning, Ethan MacKinnon and Lexie Brow were winners of their respective heats.
“These races are so much fun every year, and we really couldn’t do any of it if it wasn’t for the hard work of all of our volunteers and our sponsors,” MacInnis said. “It brings tourism to the area and so many people love it, so we want to make sure that something like this doesn’t die. It is hard to let something go that has had so much success and momentum over the years so its great to see people still coming out each year.”