Age is just a number to veteran horsewoman Mary MacQuarrie 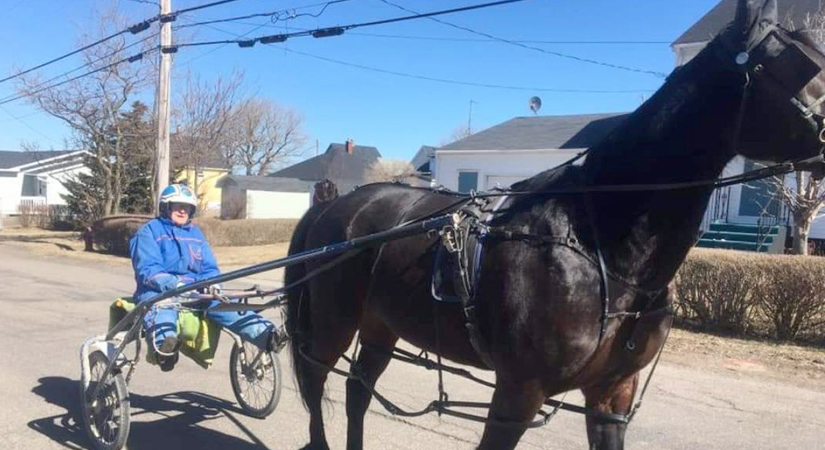 Mary MacQuarrie laughs at the suggestion she’s the most photographed woman in Inverness.
“There’s lots of photos, that’s for sure, though I don’t know what the fuss is.”
Well, it’s not every day you get to see an 84-year-old woman (she’ll be 85 on Oct. 9), dressed in harness racing silks, slowly making her way through the back streets of Inverness on her sulky, guiding her horse to Inverness Raceway for a training session.
But for Mary, that’s a normal day, just as it has been for more than 60 years when she married her now-deceased husband, Allister, in 1960.
“If I quit that then what would I do? I’d be stuck in the house. I love the fresh air. You go up to the track and nothing can bother you,” she said in an interview on Sunday.
Mary grew up on Mount Young, the daughter of Louie and Denise Smith.

“I come from a farm and have been around horses all my life. After I married Allister, he usually had two horses and I’d go with him to the track and help him get ready. Then when he had his accident (Allister, a lineman for the then-Nova Scotia Power Corporation, lost both his hands in an accident in 1977) I would do it all, and that kept him going.”
She remembers her first horse being Bobby Senator in 1961. “He was a sleigh horse too and back then we had good sleigh roads and we would go around the track in the sleigh.”
From then on, Mary and Allister, until his passing in 2011, and her five children became a prominent family in the local harness racing scene.
Her list of awards is long, but two of the most meaningful accolades Mary has received was being named the 2004 Harness Racing Family of the Year at Inverness Raceway, and being awarded the Nova Scotia Harness Racing Family of the Year at the 2012 Breeders Crown banquet.
In 2003, Mary was trainer of the year at Inverness in the 20-40 starts category.
Two years later, with Cam Dena and Majesty Becquet in her stable, Mary was trainer of the year in the 40-plus starts category with an outstanding .508 UDRS (like a baseball player’s batting average).
Also that year, her son, Dougie, was the top driver of the year with a .428 UDRS in 40-plus starts.
Cam Dena was the 2003 claimer of the year, and Majesty Becquet took the award in 2005.
She also had success with many other horses over the years, including feature horses Yankee Apollo, Ace In Hand, and Kawanda Kid.
Today, Mary is content with having just one horse, Jolts Virtue, which she keeps in the only remaining residential horse barn in Inverness that is still active.
“One horse is good, it keeps you busy enough and everything like feed and hay is so dear,” she said.
“Having the barn in the yard is great. You can go out at night and feed the horse without having to go up to the track.
“Going up to the track to jog, I meet everything in the world on the road. A few years ago they were paving a street and he (Jolts Virtue) would walk right by the workers, all of them stopping what they’re doing and looking,” she said with a laugh.
Mary said seeing so many young people getting involved in the sport keeps her optimistic that harness racing is enjoyed renewed popularity in Inverness.
“It’s coming back again, I hope. We need more younger people to get involved. It keeps the kids off the street with something to do, and gets them out in the fresh air.”
She said she is proud of her family, which gets larger every year.
While Dougie has stopped driving, he helps with the barn work and training Jolts Virtue when Mary is busy. Her daughter, Ann Copley, is active on the Inverness Raceway executive and was instrumental in keeping the barn-side of the track following the COVID-19 protocols during last year’s shortened season. She, and her husband Jimmy, are also horse owners.
Mary said she is especially proud of her grandson Jamie (Ann and Jimmy’s son), who is successful conditioner at Rideau-Carleton Raceway in Ontario.
“He has made a good career in Ontario as a trainer and owner. And now my great-grandsons are following in his footsteps.”
Jamie’s sons are Evan Gillis, and Jacob and Ryan Copley.
Mary said she is getting her COVID-19 vaccination this week and is looking forward to qualifying Jolts Virtue on May 23 and having him entered for the start of Inverness Raceway’s 95th year on June 6.
“I have lots of good memories...I’m so happy,” she said.
“And if you get a few wins you’re even happier.”