Highlanders sweep Truro to advance to U16 AAA semifinal 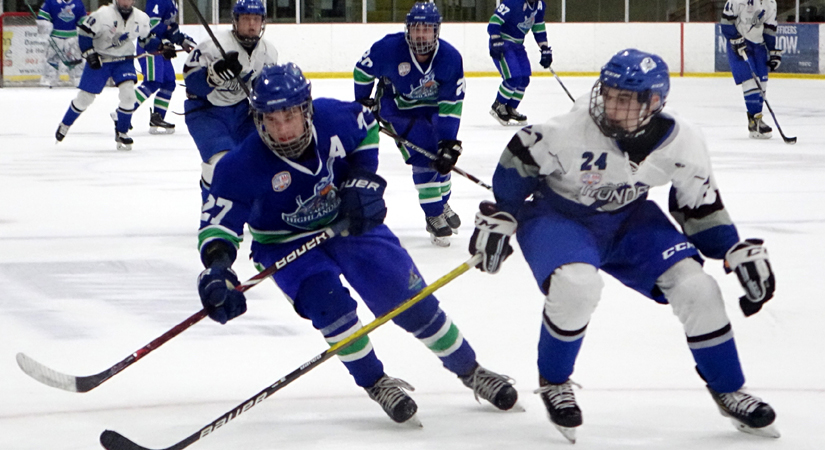 Logan McGrath scored two huge goals for the Cabot Highlanders on Thursday as they clinched their U16 AAA playoff series with Truro, scoring the tying goal to force overtime and then the winning goal in the second OT period.

The Cabot Highlanders might have been underdogs on paper in their first-round playoff series against the Fundy Thunder, but they were anything but on the ice.
The wrath of McGrath, with a brilliant goal in the second overtime period of game three on Thursday, propelled the Highlanders past the Thunder and into the next round of the Nova Scotia U16 AAA Hockey League playoffs.
Up 2-0 in the best-of-five series, it was do-or-die for the Truro-based team at the Port Hawkesbury Civic Centre, who came out hard to score 52 seconds into the game on a screen shot that rattled through the pads of Highlanders netminder Cole Goss.
The Highlanders had the first powerplay opportunity of the game and made the most of it when Cody MacDougall set up Jack Taylor cutting through the slot to put one behind Thunder goalie Michael Peters.
The Thunder took advantage of a flat second period by the Highlanders, outshooting the home team 9-4 and scoring the only goal of the frame on their first powerply to take a 2-1 lead into the third period.

Cabot’s wakeup call came in the third when Fundy went up 3-1 at 6:44 of the 20-minute final period (the first two periods are 15 minutes).
The spark was provided by Brady MacNeil with the Highlanders on their second powerplay. With McGrath and Brent O’Handley working the boards, MacNeil got the puck to the left of Peters and snapped the puck just under the crossbar for the score at 9:33.
Five minutes later, MacNeil, who is the team’s Patrice Bergeron in faceoffs, won a draw to Peter’s left, going back to Cameron Bell and Leo MacLean for a shot on goal where MacNeil picked up the rebound for an easy tuck behind Peters to tie the game at 3-3.
The powerplay continued to be a factor in the game when the Thunder scored with the man advantage to take a 4-3 lead at 17:57. Goss, who had the puck trapped at the side of the net and out of sight of the ref, waited for a whistle that never came and the puck was eventually banged in.
With the clock winding down, the Highlanders called a time out at 18:28, and Goss was pulled at 18:43 for an extra attacker and a faceoff in the Fundy zone.
With everyone at the net, McGrath scored the tying goal at 18:58 on a play in which the Thunder thought should have been blown down too, but wasn’t. Jonathan Dunphy and O’Handley picked up assists.
The first 10-minute overtime saw Cabot outshoot Fundy10-5 but the score held at 4-4.
The second three-on-three overtime was over in 27 seconds. With a faceoff in the Highlanders end, the puck sprung loose to the blueline where McGrath picked it up, outskating the lone Fundy player for a breakaway, where he scored on a nice pick over the glove of Peters to give the Highlanders the series with a 5-4 win.
“Our plan was to get pucks in deep and keep working hard,” said McGrath. “When the puck deflected up to me, all I was thinking about was getting the shot. I saw that his glove was down a bit so that’s where I went.”
McGrath said it didn’t bother the Highlanders that they were a sixth-place team playing the third-place team.
“We’re a hard-working team and we knew it wasn’t going to be easy. The Armada (who they play next in the league semifinal) is a first-place team and we just have to keep our momentum going and don’t let up.”
Highlanders coach Jesse MacLean said the team didn’t panic when down and he told them at the break to forget the first two periods and win the third.
“I told them it was a chance to reset and refocus, and they just didn’t quit,” he said.
“We had our ups and downs in the third but we got a good bounce in overtime and Logan made the most of it.”
MacLean said being the lowest seed remaining in the playoffs doesn’t bother him.
“The regular season doesn’t mean much when it comes to playoffs and like I said before the Fundy series, I like being the underdog,” he said.
“I feel pretty good about our match-up with the Armada. They’re a good team but the way they are structured is similar to us. They don’t have anyone in the top-10 scoring but have scoring throughout. We’ll adjust our game plan a bit but we won’t be changing it too much from how we played the Thunder.”
In three meetings this season, the Highlanders won  4-2 and lost 2-1 and 3-1.
The best-of-five semifinal series begins Saturday at 5:30 p.m. at the BMO Centre in Bedford. Game two is Sunday at 12:30 p.m.
The rest of the schedule has yet to be set, but will likely see the Highlanders home at the PHCC on Friday and Saturday, April 16-17, and game five, if necessary, back in Bedford on Sunday.