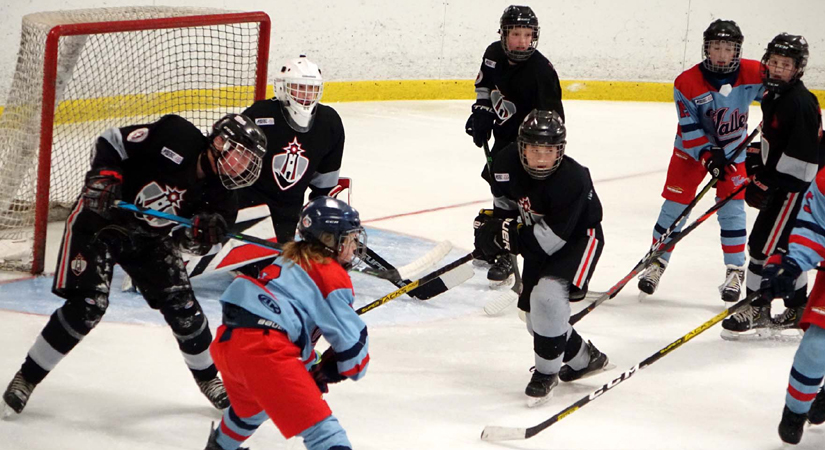 Down 9-8 in the final minutes, Islanders defenceman Angus Hughie MacLean clears the puck in front of goaltender Jake Poirier to keep the U13 AAA game against the Valley within reach.

There will not be a wilder finish to a hockey game anytime soon.
The Cape Breton West Islanders and Valley Acadia played to a 9-9 tie in Saturday’s U13 AAA game at the Al MacInnis Sports Centre.
Islanders coach Brent MacEachern was hoping to get more scoring from his team and he got it, and then some.
The game started innocently enough with the Islanders holding a 2-1 lead after the first period.
Cavan Landry chopped a point shot by Cooper MacNeil to score a powerplay goal at 6:49 and Kieran MacDonald batted a puck out of mid-air for a home run at 10:06.
The Valley got one back on a powerplay late in the period and started the second frame with a shorthanded goal to tie the game at 2-2.
The next four goals were all on the powerplay, with Carson MacEachern putting the Islanders up 3-2 at 3:01; the Valley answered at 3:32; Brady MacKinnon banging home a rebound on a Sam Trenholm point shot at 4:44; and Aiden MacDonald putting the Islanders up 5-3 at 6:07.
Taking a break from trips to the penalty box, the Valley proceeded to score four straight even-strength goals to take a 7-5 lead, knocking Leo Forance out of the Islanders goal and Jake Poirier coming in for relief.
Olan Van Zutphen scored a nice goal on a pick from the high slot to bring the Islanders to within one at 14:18, but the Valley scored another powerplay goal with two seconds left to take an 8-6 lead into the dressing room at the break.
With a game’s worth of goals already in the book, the two teams weren’t done yet.
Kieran MacDonald scored his second of the game with a powerplay goal at 3:18 of the third, banging home a rebound on a point shot by Angus Hughie MacLean.
The Valley regained their two-goal lead a minute later.
Lance Heukshorst scored on a tough angle for a powerplay goal at 6:41, assisted by MacEachern, to make it a one-goal game once again.
With the clock winding down, the impossible happened.
The Islanders, pressing for the tying goal, forced the Valley’s second goalie to make a big save with what should have been four or so seconds left.
However, the clock kept running to the 1.2 mark.
Referee Chris Clarke, knowing the clock had run past the whistle, had the timekeeper reset it at 3.0 seconds.
With the faceoff to the goalie’s left, Reid MacDonald won the draw, Angus Hughie tipped it back to Carson MacEachern, and his shot deflected off a skate and into the net, a split second before the buzzer sounded.
“We never quit; they were determined and knew they could do it. We’ll take the tie,” said coach MacEachern.
“Our trouble this season has been scoring goals, two or three is usual and lucky to get four. Nine is a pleasure. Maybe having our defence playing offensively made us susceptible to some bad goals, but for now, we’ll live with it.”
The Islanders have approximately 10 games left in the regular season. Sixteen teams make the playoffs, with 1 vs. 16, 2 vs. 15, and so on in one-game eliminations.