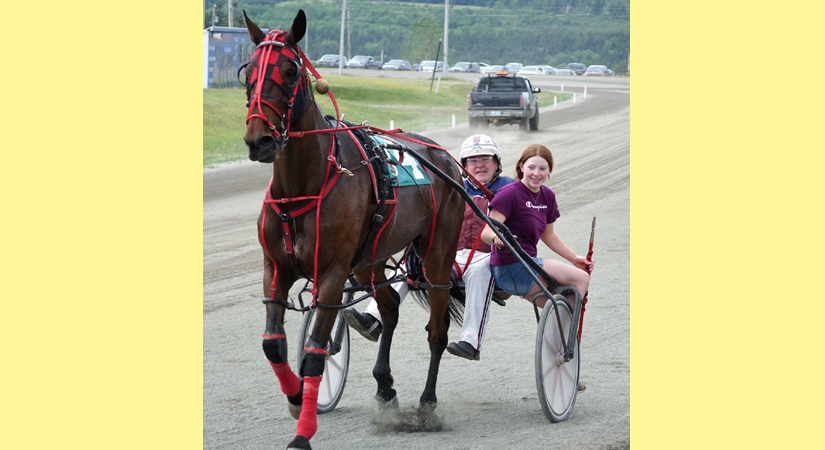 Owner Madison Poirier and her dad Joey were all smiles Sunday after 13-year-old Unstoppable Speed picked up a 2:00.1 win to start the 2020 Inverness Raceway season.

It was a great day.
For some people, the first card of live harness racing at Inverness Raceway was the first live sports event they’ve watched since March.
For most people, it was simply a welcome return to spending a warm, Sunday afternoon with like-minded people who appreciate what having a facility like the raceway means to our county.
And for Redmond Doucet, it was a return to what he does best – winning races.
Doucet kicked off the season by winning four of the eight dashes on Sunday, including an impressive 1:56.4 trip with three-year-old filly Na Naa Said So in race seven.
Owned by the father-son team of Hughie and Ali MacEachern, Na Naa Said So wrapped up a great season as a two-year-old by winning the $24,000 Maritime Breeders championship in Truro last Octover, setting a new mark of 1:56.2.

In her first race this season, Doucet had her to the front off the gate and paced the mile seemingly effortlessly, holding off a valiant Twisted Frisco and owner/driver Shawn MacDonald who logged a final quarter of 28.4 to finish a head back of Doucet.
Doucet’s first two wins were aboard George Rennison-trained campaigners: six-year-old mare Sauble Bonnie in the first (2:01.3) and 12-year-old gelding Electric Syl in the sixth (2:02).
With three wins under his belt, he was back on the bike for the feature race in the eighth to guide nine-year-old Intended Royalty to a win 1:58.3.
Owned by another father-son partnership between Ed and Randy Copley, Intended Royalty had nine wins and six seconds in 22 starts last season before taken off the circuit in late August for a rest.
On Sunday, Walter Walker and Modern Best stayed nose-to-helmet with Doucet through all three stations but Intended Royalty kept the 12-year-old mare, owned by Simon Poirier and Chad MacDonnell, in the rear view to the finish line.
A trio of two-year-olds took centre stage in race two with a highlight-reel performance.
Wayne MacLellan’s two-year-old colt Dollars And Spence stole the show with Rodney Gillis giving the young horse a gate-to-finish win and a maiden mark of 2:00 flat.
Two-year-old filly JJ Talisa, owned by Bobby and Maria MacLeod, also looked solid, pacing the mile in 2:00.3 for driver Andrew MacLean for a second-place finish.
And Lennan MacIsaac’s colt Rotten Ronnie was up to the task, posting a clean line with Doucet on the reins to finish third in 2:02.
Gillis had two wins on the day, taking another Rennison-trained horse, Lively Freddie, to a win in 2:00.4 in the fourth.
Rounding out the card, Joey Poirier put up a win with Unstoppable Speed in the third, turning in a good mile of 2:00.1 for owners Madison Poirier and Susan Miller.
And Charles Fraser’s five-year-old mare This Old Millie paced the mile in 2:02 to win the fifth race.
There was a seven-dash card held on Canada Day and racing resumes this Sunday at 1 p.m.
The following are the complete results from Sunday’s card: