Three late goals give Pirates a 4-2 win over Eskasoni 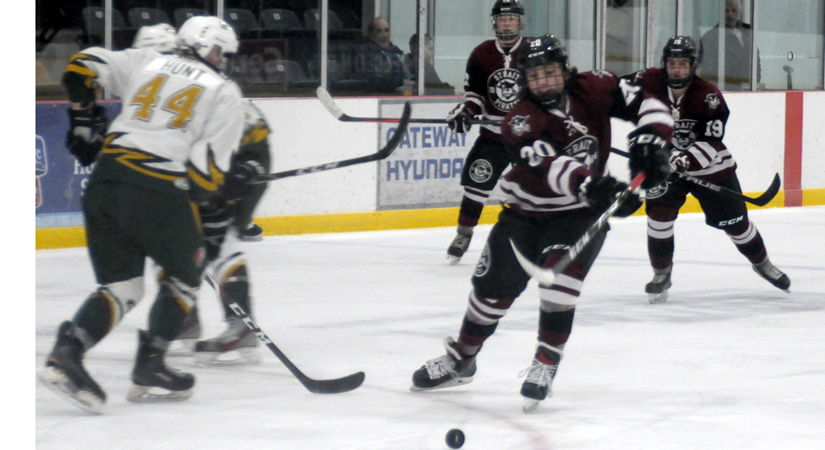 Jason Johnson is the Strait Pirates’ top offensive defenceman, leading all blueliners with six goals and 13 assists for 19 points in his rookie season.

If you showed up for Friday’s Strait Pirates’ game with four minutes left on the clock, then you got to see the best four minutes of their 4-2 win over the Eskasoni Junior Eagles.
The last-place Eagles, who pulled off a 7-5 win over the Junior Miners earlier in the week, were leading 2-1 and looking for the upset before the Pirates woke up.
Unfortunately for the Eagles, the alarm clock went off before they could tiptoe unnoticed out of the Port Hawkesbury Civic Centre.
Bryce Reynolds was the first to hear the alarm, scoring the tying goal at 16:11 on a play with Josh Foster.
Thirty-seven seconds later, Pirates’ captain Jacob Keagan scored the game-winning goal, capitalizing on a feed from Joshua MacMillan to beat Eagles’ netminder Alexander Denny.
Keagan added the insurance marker into an empty net to seal the deal, with Branden Dauphinee picking up an assist.
The Eagles outshot the Pirates 35-22, with Hunter Forance keeping his team in the game, including through the second period where shots were 15-4 for Eskasoni, to remain undefeated in his Junior B career with his second win.

Reynolds and Foster had the Pirates up 1-0 in the first with Reynolds sniping a cross-crease pass from Foster to score short side.
Thomas Stevens evened the score with an unassisted goal late in the second, jamming the puck under Forance during a goal-mouth scramble.
Former Pirates’ forward Nick MacGillivray scored to start the third frame, giving the Eagles their short-lived lead.
Pirates’ coach Taylor Lambke was happy to salvage two points from what was a dog’s breakfast of a game.
“That was probably the worst game we played all year, so to get two points from a game we didn’t deserve two points in – we’ll take it,” said Lambke.
The Pirates handled the Liverpool Privateers 6-3 the week before with just 13 skaters. On Friday, the Pirates had a full lineup for the first time in weeks.
“We had different guys, different minutes, different looks on the powerplay, our defensive structure was breaking down, missed passes. Throughout the whole game our frustration was mounting, and at the end it was just finding a way to get points in this game,” he said.
“We didn’t give up and character took over.”
With eight games left in the regular season, the Pirates need points in every game if they’re going to hang onto first place in their division or first overall in the Nova Scotia Junior Hockey League.
The Pirates are currently first in the Sid Rowe Division with 35 points (16-5-3). However, the Antigonish Bulldogs and Junior Miners are nipping at their heels with games in hand. The Dogs have 33 points (16-4-1) with three games in hand and the Miners have 32 points (15-5-2) with two games in the bank.
Two of their remaining games are against the Miners and one against Antigonish.
“The schedule is similar to last year, except last year we had clinched the division and played a bunch of meaningless games with nowhere to go but down. This year, our remaining games are important – if we want a chance to finish first then we’re going to have to win out.”
Lambke said he likes the Pirates’ chances.
“The guys who were there last year have all matured and are playing with confidence. Our back end, from the start of the year to what it is now, has brought our goals against way down.
“We’re on a 10-game stretch of playing some of our best hockey all year. We don’t want to change that,” Lambke said.
The Pirates are at home to the Pictou County Scotians this Friday. Game time is 7:30 p.m. at the Port Hawkesbury Civic Centre.
The following Friday, Jan. 24, the Pirates are in Antigonish for what amounts to a four-point game. Then on Sunday, they are in Trenton for their last game against the Scotians.