Major Midget Islanders finding their groove a month before playoffs 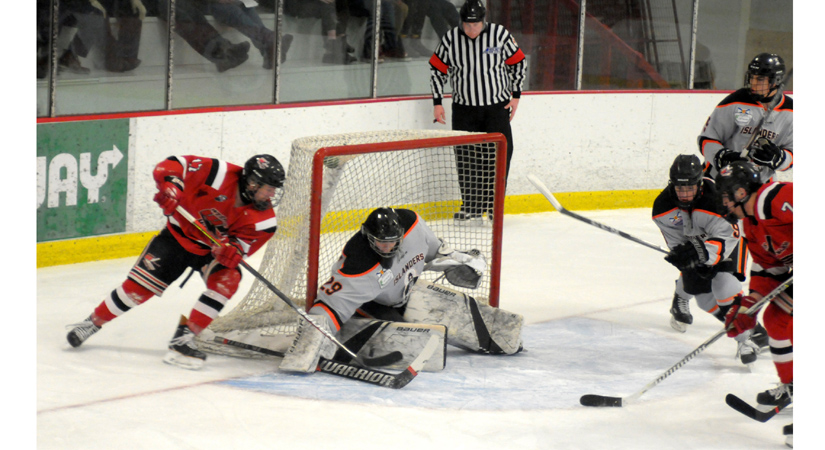 Cape Breton West goaltender Kenzie MacPhail makes a save on a wraparound attempt by Pictou’s Bryson Currie during Major Midget action at the Al MacInnis Sports Centre on Dec. 27.

In the NHL, it’s the teams that are playing playoff hockey a month before playoffs, just to get there, that are the ones with momentum in April.
In the Nova Scotia Major Midget Hockey League, everyone goes to the post-season, but the Cape Breton West Islanders hope to be carrying some momentum of their own.
Peaking at the right time, the Islanders have six wins in their last nine games and have moved from the cellar into sixth place in the eight-team league.
There was very little rest for the Islanders over Christmas, beginning with a Dec. 27 game at home that saw them come back from down 3-2 to Pictou County in the third to win 4-3 in overtime.
With the game on the line, Islanders’ coach Nick MacNeil rode his horses and the top line – Lewis Taylor, James Beaton, and Dave Matthews – didn’t disappoint.
Taylor tied the game midway through the third, roofing a pass from behind the Pictou net by Beaton.

Kenzie MacPhail, who held the fort in the Cape Breton West goal, faced 40 shots, including 14 in the third to get his team to overtime.
There was only one shot in OT and that was the game-winner by Taylor on a head-man pass from Matthews, bursting down the middle for a pick on Pictou goalie Marcus Pettipas 36 seconds into the extra frame.
Matthews opened the scoring in the first with a powerplay goal and Luke Hadley scored the other single.
Two days later in Membertou, the Islanders built a 5-1 first period lead on the Sydney Rush, only see that lead get whittled away with the home team picking up a 6-5 shootout win.
Taylor and Bryce Thomson each had a goal and two assists to lead the Islanders. Beaton and Matthews had a goal and an assist apiece. Daniel LeBlanc scored the other single.
Shots were 38-30 in favour of the Rush, with Adam Tkacz taking the loss in goal.
The two Cape Breton teams hooked up again on Jan. 2 in Port Hood. The Islanders had a similar start, leading 4-0 after the first, but this time shut the door on a Sydney comeback for a 6-3 win.
The Islanders were relentless on offence, outshooting the Rush 49-27 with MacPhail picking up his sixth win of the season.
Matthews, Taylor, and Beaton combined for eight points in the game, with Matthews leading the pack with two goals. Singles were scored by Luke Hadley, Thomson, affiliated player Ben Kenneday, and rookie defenceman Liam Trenholm with the game winner.
Beaton said the Islanders’ 5-3 win over the Macs in Halifax on Dec. 21 was a turning point for the team, coming off two bad beats the weekend before.
“Those losses (9-1 to Dartmouth and 13-3 to Cole Harbour) were pretty disappointing. We were definitely struggling, but I credit the coaches and the leadership on this team for keeping us all on the same page,” said Beaton.
“The win over Halifax gave us a boost in confidence. We’re just heating up now and playing good hockey – just a bunch of guys who want to win.”
This past weekend, the Islanders were back on the road where they pulled off another big 4-3 overtime win over the McDonalds on Saturday.
Trenholm spotted the club a 1-0 lead in the first period on a play with Kennedy and that score held into the third period behind some fine goaltending by Tkacz who faced 54 shots in the game.
Thomson put the Isles up 2-0 at 6:57 of the third with assists from Daniel Gillis and Calvin Denny.
Halifax got on the board two minutes later, but a goal by Brant Timmons, on a play with Thomson, restored Cape Breton West’s two-goal lead.
However, the Macs turned up the heat and scored twice in the final minutes to send the game into overtime, tied 3-3.
And with 40 seconds left in the extra frame, Taylor did it again for the Islanders with the unassisted winner.
However, Dartmouth still proved to be a hard nut to crack on Sunday, snapping a 2-2 tie after 40 minutes with three unanswered goals in the third period and a 5-2 win.
Luke Hadley and Thomson had the goals for Cape Breton West. Shots were 39-21 in favour of Dartmouth, with MacPhail tagged with the loss in goal.
This weekend, the Islanders are in Halifax for the annual Ice Jam tournament. Cape Breton West has owned this 21-team tournament in the past, winning it twice and last year being the only Nova Scotia team standing among the four semi-finalists.
They return to league play the following week with six games remaining in the regular season.
On Friday, Jan. 17, they host the Kensington Wild in a P.E.I./N.B. league interlock game which counts in the standings. Game time is 7 p.m. at the Al MacInnis Sports Centre in Port Hood.
The second interlock game, both of which were postponed in December, will be held in Port Hood on Saturday, Jan. 25, at 1 p.m. when the Charlottetown Knights take on the Islanders.