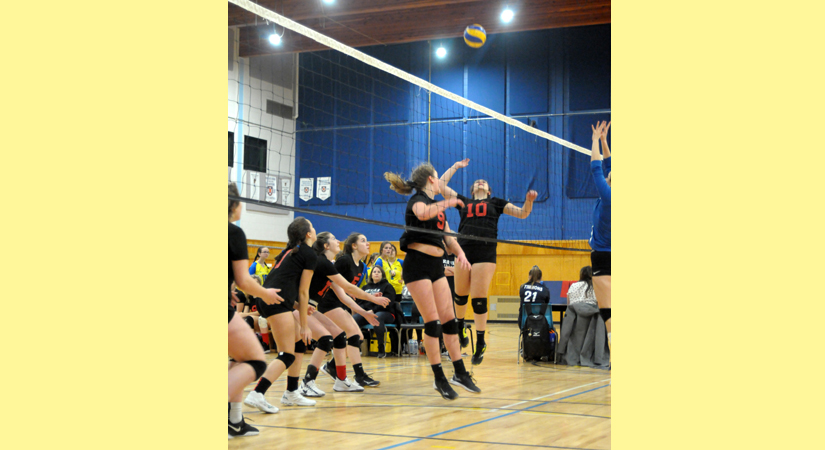 The Inverness Rebels on the attack, first a fake by Sarah Ryan to set up a solid hit by Caris Forance, on the way to winning the Highland Region Division 3 girls volleyball championship in Sydney on Saturday.

There was a time when girls’ volleyball banners in Inverness were as common as lobster traps on the wharf.
And there was a time when former SAERC Saints coach David MacIsaac saw a regional banner as a means to a provincial end.
To coin a phrase: “Whoa, baby, those times are back!”
The Inverness Rebels cruised to victory in Sydney on Saturday to capture the Nova Scotia School Athletic Federation Highland Region Division 3 girls volleyball title – ending a seven-year drought.
The Rebels defeated the NDA Aigles 25-9, 25-17 in the championship game, held at Centre Scolaire Étoile de l’Acadie.
“I’ve been involved in a lot of regional banners, but this one’s special,” said MacIsaac. “For these kids, it’s their first one and what a great way to reward them for their efforts. I’m lucky they let me coach them – it keeps me going.”
The Rebels also won the semifinal in two sets, defeating the host school 25-14, 25-10.
The one bump on the road was provided by the Cape Breton Highlands Huskies during round-robin play.
The Rebels won the first set 25-14, with the Huskies seemingly having no answer to the power of Sarah Ryan and Caris Forance at the net, or the deadly serving of Emma Kennedy and Avery MacKinnon.
However, the Huskies rallied in the second set behind the strong net play of Zoe Collasius and Megan Hinkley, backed up by service runs and determined back-court play from Olivia Hart and Hannah MacIntosh, to beat the Rebels 25-20.
The third set was all Inverness, with Kennedy serving to 6-1, MacKinnon taking it to 13-2 on her serve, and Ryan closing it out for a 15-4 win.
“It was a good lesson for us and I used that lesson in the next two matches,” said MacIsaac. “We won a lot of third sets against teams both ways (either winning the first set and losing the second, or losing the first set and winning the second). I think we benefitted from being there before, but against CSEA and NDA, even though we won the first set of those games, I asked them to play the second set as if they lost the first.”
The banner win sends the Rebels directly to provincials without needing a qualifier. Provincials are in Pomquet this year and will include the defending champs from East Antigonish.
“When we serve the way we can, we can beat anybody. Avery and Emma are consistent, so when I asked them to trust me and start serving to certain positions, rather than just getting the ball in, they were willing to try it,” said MacIsaac.
“And I tell all of them, you’re going to miss a serve, or miss a pass, or miss a hit, but it’s what happens after that counts.”
Provincials are scheduled for Dec. 6 and 7 in Pomquet.
The Rebels were back on the court last night (Tuesday) as hosts of the Cape Breton West High School Volleyball League championship tournament.
The Rebels were scheduled to play NDA first, followed by a game between SAERC and SAERC Junior Varsity. The two losing teams played a consolation match and the two winners played for the league banner.