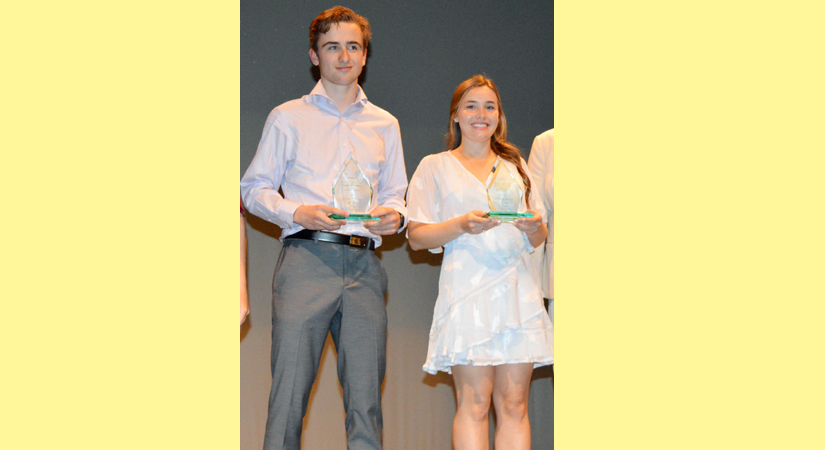 “Who ever received an award tonight earned it,” said John Hendsbee, teacher at Dalbrae and the evening’s emcee.
Hendsbee welcomed faculty, parents, friends of Dalbrae, and students to the 2018-2019 awards celebration.
Maggie Power, a student at Dalbrae Academy sang the national anthem.
Principal Ann Whalley greeted students, parents, and guests by saying that they have gathered to celebrate student success.
She explained that those present are the best in a group, got the highest mark in a class, or had the most points in a game.
“You also achieve success by playing on a team and achieving a goal together,” said Whalley.
“When looking back, these accomplishments will make you smile,” added the principal.
But, she said, that what defines you is having the courage to challenge yourself, to struggle and to persevere.
“You can have courage and you can have comfort; but you can’t have both,” said Whalley.
“Push harder, be braver, do more than just have a goal,” she said.
“It’s good to struggle; once you struggle and then succeed then you know real success,” she closed.
Riley van den Heuval was the guest speaker, she graduated from Dalbrae in 2015, with honours, and was named female athlete of the year. She recently graduated from the Dalhousie Agricultural College with a Bachelor of Science.
She said that when she was at Dalbrae she tried to be the person who tried out for every sports team.
“In Track and Field was where I found my niche,” she said.
Van den Heuval broke records in high jump and after high school she was the captain of the national team when they competed in British Columbia.
She discovered that trying to find a balance between her high jump training and academic goals was far more challenging than she had anticipated, so she postponed her competitive high jump training with Dalhousie and joined the Dalhousie basketball team.
She explained that travelling to train for high jump in Truro was going to end up impacting her academic performance.
“Be open-minded and accept new challenges,” she said.
In general, her advice to the students was to “get involved.”
“Get involved in your community, your school, clubs, and sports teams,” said van den Heuval.
“Meet people and have new experiences; you’ll be thankful for the people you have met along the way,” she said.
“Be involved and be grateful to those who have pushed you,” said van den Heuval.
“You won’t win every battle or get an ‘A’ on every test, but do your best...and pride yourself for choosing to be involved, be proud of what you have accomplished and look forward to the future,” she closed.