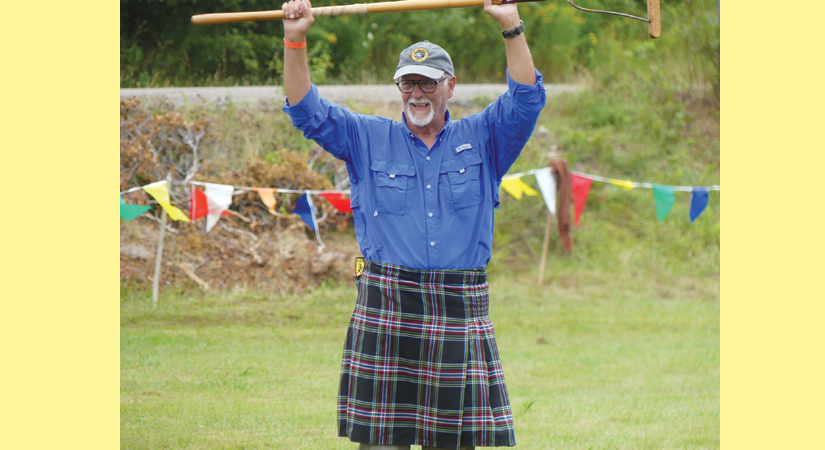 -by Brad Chandler
It has been called one of the best games in Canada, and for its 9th annual event, heavy rain and overcast skies didn’t dampen the spirits of those in attendance at the Margaree Highland Games in Margaree River Valley.
Occurring over two days this past weekend, many local residents and athletes gathered to witness a blend of traditional heavy events with bag piping, highland dancing, children’s games, and much more.

“We as a games, as a parish, and as a community are truly blessed to have everyone join us today where we are celebrating the joining of sport, dance, music, and culture in a very special way,” said Audrey LeBlanc, event executive director during Sunday’s opening ceremonies.
Twelve athletes were showcased during this past weekend’s heavy events which consist of shot put, tug-of-war, caber toss, and hammer throw competitions.
In her very first Highland Games, Margaree’s Emily Leblanc joined a handful of other local athletes during Sunday’s competitions. Starting in the junior ranks and quickly becoming one of the top throwers in the country over the past few years, Margaree’s Jesse Leblanc also competed Sunday. Liam Fraser, who had recently returned from representing Canada in Bressuire, France, on the world stage, came back to his hometown of Margaree where his career began nearly five years ago for this weekend’s games.
Some neighbouring competitors who travelled from places like Halifax, New Brunswick, and Antigonish also competed in this year’s competition such as one of the top women’s throwers in the country, Liz MacDonald and recent World Masters Champion Adena Robinson.
In June 2015, the Margaree Highland Games forged a formal partnership with Highland Games Bressuire in France in an effort to support and strengthen one another’s events.