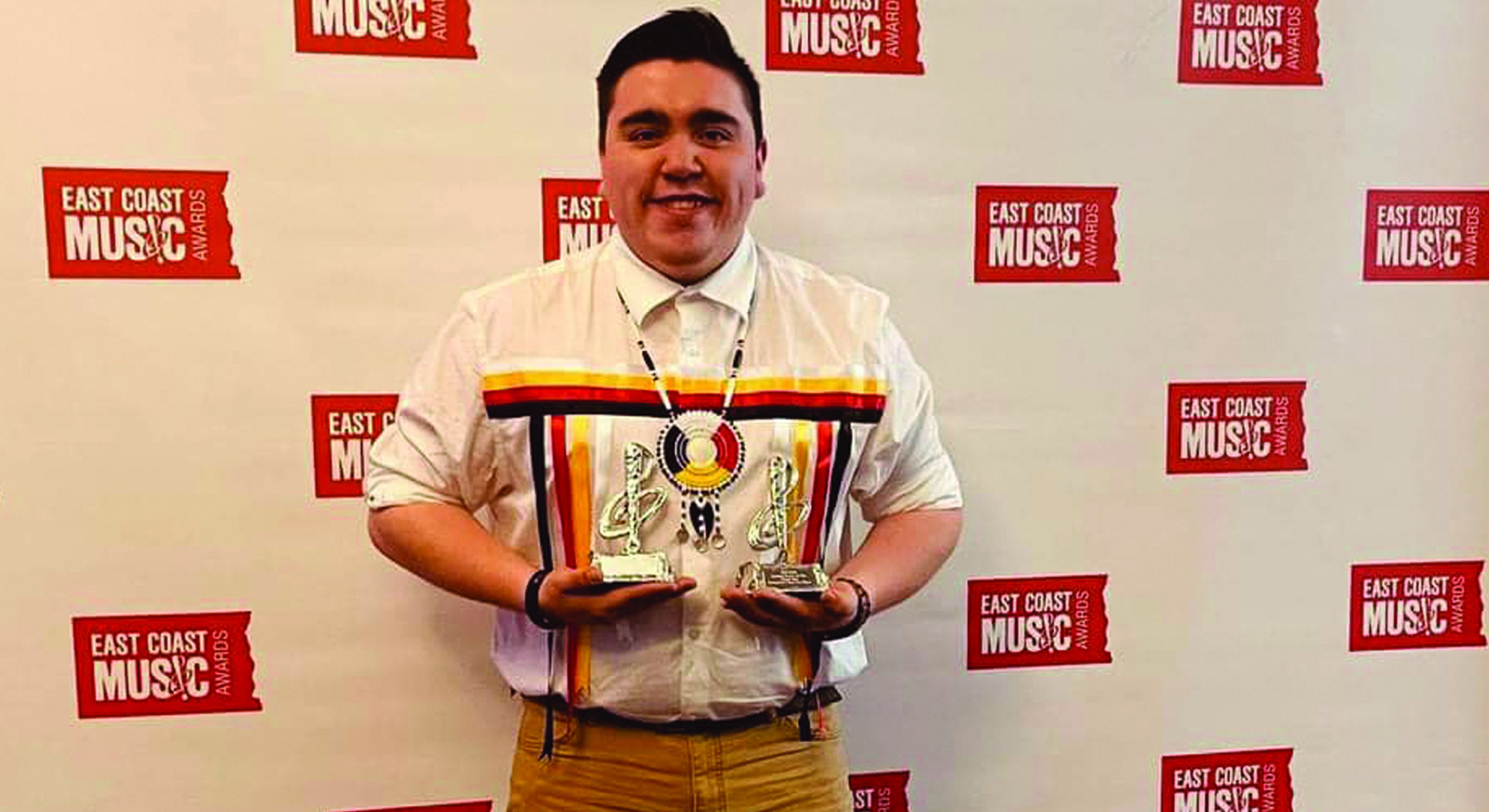 -by Brad Chandler
On a weekend when the best musicians of Canada’s East Coast are honoured, a young Cape Breton fiddle player picked up his first two East Coast Music Awards this past weekend at the Fredericton Convention Centre.

Wagmatcook’s Morgan Toney, 22, left this year’s festival with his hands full of hardware, winning the Indigenous Artist of the Year and Inspirational Recording of the Year for his debut album First Flight, which was released on March 25th.
“It felt like a dream,” Toney said in an interview with The Oran. “It was really great to just be there and to take everything in and to meet and network with new people and to build relationships.”
Despite only playing the fiddle since 2018, the 22-year-old has become the talk of the Atlantic music scene over the last number of years, having already shared the stage with a number of the East Coast’s best like Ashley MacIsaac and Jimmy Rankin.
Going into this year’s ECMAs, Toney was nominated for three awards for his first album First Flight, which he worked on with multi-award winning Cape Breton artist Keith Mullins.
“When I was travelling down (to the festival) I wasn’t really nervous per se, I was just more excited to showcase (my music) and to put on the best show that I could,” Toney said. “It would have been a really hard choice to pick a winner (for these awards) because I was up against so many great nominees, many of whom I know personally. The seconds of dead silence, waiting to hear who won felt like five minutes.”
Throughout his short career, Toney’s been able to invigorate both the Atlantic music communities and Mi’kmaq communities by bringing together the sounds of Cape Breton Island with the old songs of the Mi’kmaq, some dating back up to 500 years. He calls this fusion Mi’kmaltic (Mi’kmaq + Celtic) and it’s his way of celebrating his language and heritage.
The Wagmatcook resident says his music is made to honour the elders who’ve taught him the songs and the language of his Mi’kmaq ancestors.
“I wanted to do something that’s meaningful to me, that’s meaningful to my community and to the entire Mi’kmaq nation. I think it’s time that music has to come out of Mi’kmaq nations more often. I think that now is the time, when everything is going on in the world with the residential schools and missing and murdered Indigenous women. These are issues that nobody is really talking about. So, it’s our job as musicians to provide a voice in (these) conversations,” he said.
In its 34th year, the ECMAs are continuing to showcase Atlantic Canada’s musical best, bringing together musicians from all genres in a five-day, non-stop musical celebration, recognizing the best of East Coast artists and music. Each year, the goal of the event is to position and promote it as the premiere music event for the public and the music industry in Canada and the conference of choice for artists and industry professionals.
Toney says this year’s festival allowed him to “get out of his comfort zone” and find confidence in himself to share the stage with some of his musical inspirations.
“I remember two years ago when I was just sitting in the crowd and taking in the shows and just sitting there with my feet kicked up. But now, I’m a full-time artist and there’s a lot of momentum behind me,” Toney said. “It’s really great to be respected by other musicians. I met a lot of well-known musicians here and I feel like that’s one of the most important things that we have to keep in mind as musicians because the most important thing is we have to encourage each other, we have to inspire each other. We (have) to listen to each other.”
Toney noted a highlight of his week was his run-in with a group known as the East Coast Mamas, mothers of the artists featured by the ECMAs. The 22-year-old says the group embodied what the ECMAs are all about, as they made him feel welcomed and supported throughout the weekend. A feeling he says reminded him of home.
Over the past year, Toney has been very vocal about his mother’s ongoing battle with a brain tumor and the inspiration she gives him to find success. Now after picking up his two awards this past weekend, Toney’s mother is now an award winner herself and a brand new East Coast Mama.
“Just to have her in my corner is amazing,” Toney said. “She used to take me to gigs before she had cancer, and she was there for a couple of my shows in the early days of my career. It was really great. To see her getting the award for becoming an EC Mama, it makes sense, it’s very emotional, but you know, it makes total sense that she was recognized as well.”
Toney has a full schedule of touring in the coming months throughout Ontario and Atlantic Canada. He is said to be in the midst of writing an EP with the working title of Legacy which is a group of songs written to honour those that have helped Toney throughout his career thus far. It is expected to be released sometime over the next two years.
“(These awards) were like a dream come true. I said to myself, one of these days I’m going to be on that ECMA stage accepting an award, but I pictured myself (as) like a 43-year-old man, but being 22 and winning these awards is amazing. It just shows how much hard work that we put into it and it finally paid off.”