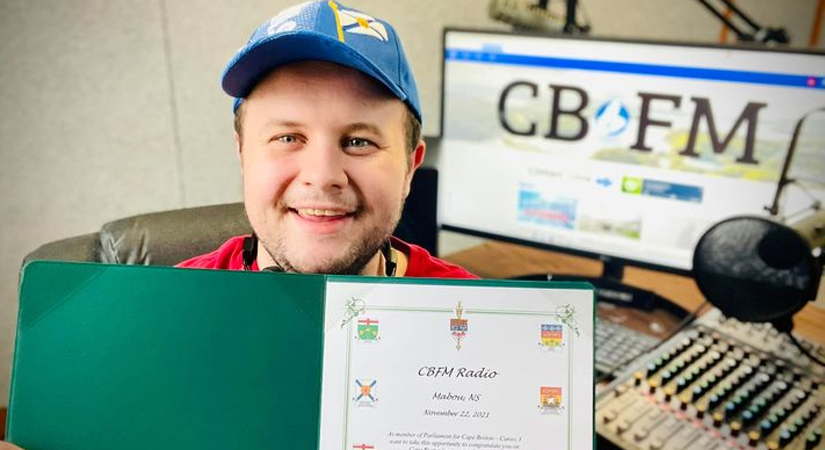 Ryan MacDonald and his team at CBFM received recognition from MP for CB-Canso, Mike Kelloway.

-by April MacDonald
He’s got big energy, an infectious smile, and is the son of the Honourable Rodney MacDonald – and now he is at the helm of the county’s newest radio station based out of Mabou.
Ryan MacDonald just marked a one-week milestone of hitting the airways and he has made it his mission to get people all over the world excited about Celtic music, the Gaelic language and all things Cape Breton.
MacDonald was the first on air host and can be listened to on Monday – Friday from 8:00 a.m. - 3:00 p.m.
Their Gaelic host is Colin MacDonald, starting Monday they have Feasgar còmhla ri Cailean Dòmhnullach – the show is in Gaelic and runs Monday-Friday evenings from 7:00 p.m. - 9:00 p.m.
Colin is the director of Gaelic at Colaisde na Gàidhlig. The show debuted Monday evening.
Other radio personalities that have regular time slots are Nate Power, who works weekends (Saturday and Sunday) from 8:00 a.m. to 12:00 noon and Krista Luddington (Saturday and Sunday) from 12:00 noon to 4:00 p.m.
CBFM operates in coordination with Beinn Mabou, the satellite campus of St. Anne’s Gaelic College.
The new internet radio station will feature local music, news, and weather and broadcasts directly from Mabou (at the site of the former St. Joseph’s Convent).
Looking back on how the week went for the county’s newest station, MacDonald said that, “week one was amazing!”
“We had over 15,000 visit our website! All across Canada, US, UK, Poland, Japan, Australia, New Zealand, and many more places,” said MacDonald.
He added that the most popular show so far was the Cape Breton Kitchen Party, which is Saturday nights from 7:00 p.m. - 9:00 p.m., which is hosted by him.
“It’s a look into some old tapes from house parties in the ‘70s, ‘80s, ‘90s, and early 2000s,” said MacDonald.
He was also very excited about the Gaelic show with Colin MacDonald that started Monday night, whether you speak the language or not, many listeners said it was “music” to their ears to hear the old tongue on the airways.
MP Mike Kelloway, for Cape Breton-Canso, dropped off a congratulatory note to the radio station on their success.
MacDonald said that this is only the beginning.
Well done on keeping Gaelic culture, Celtic music, and our traditions alive and vibrant.
The future looks bright for Cape Breton Island and Inverness County.