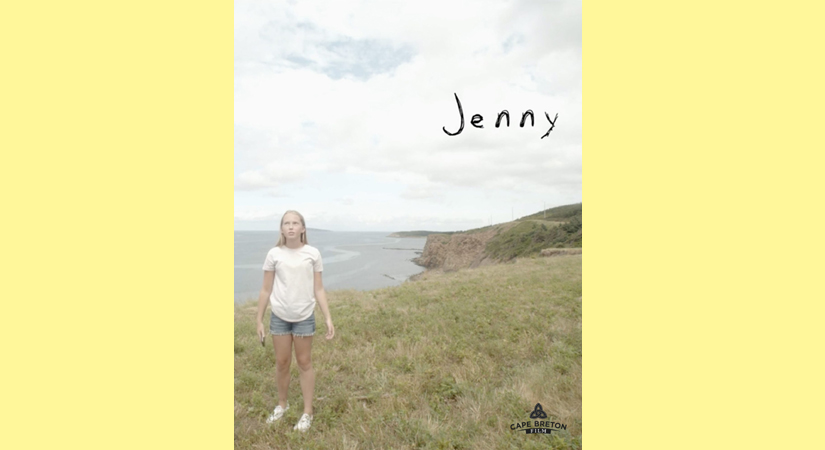 Poster from the Cape Breton Film production Jenny, which was directed by Tom Ryan and will premiere at the Inverness County Centre for the Arts on Saturday, October 16th, as part of an evening of short films by up and coming Cape Breton filmmkaers. Jenny was also selected to screen in competition for the “Queer Fear International Film Festival.”

On Saturday, October 16th, Inverness County Centre for the Arts is excited to host an evening of short films by up and coming Cape Breton filmmakers, including the world premiere of Cape Breton Film’s most recent production, Jenny, recently selected to screen in competition for the “Queer Fear International Film Festival.”
– Jenny (director Tom Ryan): When Alice’s parents drag her to a rundown house in the country; she’s prepared for the most boring summer vacation ever. Then she meets Jenny…
– Bha Iad Làn Sgeulachdan, (director Todd Fraser): The director’s grandfather Willie Francis Fraser reflects on the long-form storytelling he heard in his youth on Cape Breton Island, his relationship to the Gaelic language, and his extraordinary experience of learning to dance in a series of dreams he had as a boy.
– The Broken Ground (first five minutes) (director Liam MacDonald): Underpaid. Undervalued. Underestimated. Based on the book The Broken Ground by Ned MacDonald, this feature-length historical documentary explores the rise and fall of the Inverness coal mines and town through interviews, archival footage, photography, and more. (Note: this screening will be a sneak peek of the first five minutes of the feature documentary.)
– Cùm Romhad (Keep Going) (director Joyce MacDonald): A hapless daydreamer locks herself out of her apartment and tries to get back in.
– Can You Check in the Back? (director Gee Stewart): Marjorie thinks she’s in for a normal night at the video store, until a strange customer comes in with an odd request.
The screening will run from 6:30 p.m. to 8:00 p.m., and will include short Q&As with all of the attending filmmakers. Admission is free, but donations will be accepted at the door. Space is limited, and NS COVID requirements will be observed, including proof of vaccination and masks worn during the screening. If demand for tickets is high, there might be an additional screening, directly after the first.
To reserve tickets, please visit the Inverness County Centre for the Arts website at www.invernessarts.ca or reach ICCA by phone at 902-258-2533.