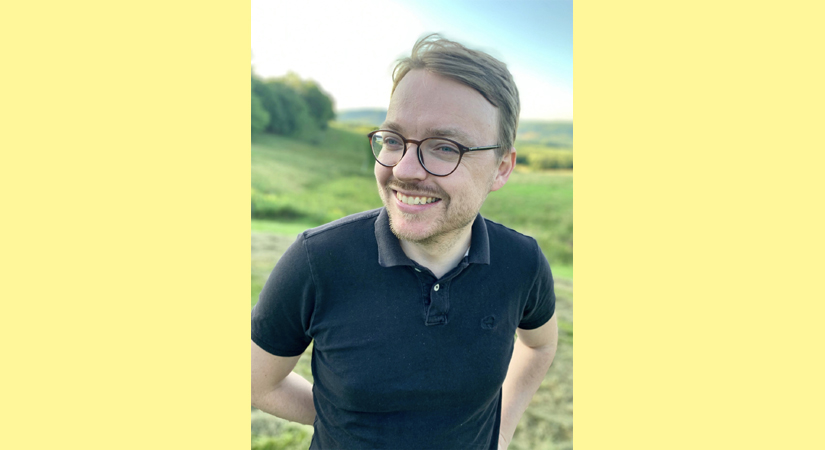 He was sworn to secrecy and received a mere 24 hours notice telling him that he made the cut for the Canada Reads 2021 long list.
It’s an accomplishment in and of itself that his debut novel, titled Dirty Birds, has been long-listed for the 20th season of CBC’s popular show Canada Reads.
“I got an email from my publisher – I was shocked and surprised considering it was my first book,” said Murray, in an interview last Thursday afternoon.
When The Oran first reached out to the author he was clearly trying to put his wee daughter, Mary, down for her nap. Let’s just say he is likely more skilled with words than lullabies.
Murray found his way to “back woods” Mabou through his wife, author and cartoonist, Kate Beaton. He said that although he is a “from away” he has very much been embraced by the community.
“The local community has been so kind and supportive, especially Brook Village Grocery, who are selling my book locally,” said Murray.
It’s fair to mention that the book has certainly been flying off the shelves at the incredibly rural and much-loved community store. To date, they have sold over 50 copies.
“It’s been nice being adopted by the locals,” he added.
In true Canadian fashion, the annual “battle of the books,” has quite literally been getting people excited about books for almost 20 years.
Murray being long-listed is big news for Atlantic Canadian books. Several NL authors have graced the Canada Reads long-list, including most recently Megan Gail Coles (2020) and Sharon Bala (2018).
However, Murray’s 2021 long-listing marks one of the few, and first since 2014, Atlantic Canadian published books to be selected.
When asked what happens next, Murray said that he will have to endure one week of fretting and then he will find out whether or not he makes the short list.
“I guess I am hoping for the best and preparing for better luck next time,’ said Murray.
How it works is:  a long list of 15 Canadian books is chosen by celebrity panellists, with the help of the CBC Books team. These books are ones the panellists feel the nation needs to read.
Inverness County is certainly crossing fingers for Murray as every book that has won Canada Reads has gone on to become a national bestseller.
“Hilariously ironic and irreverent, Dirty Birds is a quest novel for the 21st century – a coming-of-age, rom-com, crime-farce thriller – where the hero, Milton Ontario’s (not to be confused with Milton, Ontario) battles his greatest foes: his own crippling mediocrity, and getting out of bed before noon, as he pursues fame, fortune, and his hero: Leonard Cohen.”
Murray said that he based his book from his time spent in Montreal back in 2007. “The main character and I share a similar story,” he said.
Murray attended a writing workshop with Lisa Moore back in 2014 and it was in that class that he was challenged to write a more substantial piece.
“In 2015, my publisher, Breakwater Books, asked, ‘Do you have a novel?’ So, in 2018, I sat down to write it; 2019, I began editing and it has been available to purchase since August 2020,” explained Murray.
“I’ve been blown away by the response Dirty Birds has gotten since it came out, mid-pandemic. I’ve gotten a lot of really kind messages from people who have gotten a laugh, and maybe more out of the book, and now to be long-listed for something as big as Canada Reads! I’m flabbergasted!” closed Murray.
Praise for Dirty Birds:
Dirty Birds has been turning heads nation-wide since its release this past August. Lisa Moore, Canada Reads 2013 winner, praised Dirty Birds as “a brilliant, antic, absurd and cut-to-the-quick satire of millennial life.” She said, “there’s a laugh and beautifully conjured insight on every page of this joyful extravaganza. [It’s] a very, very funny and boldly imagined novel.”
And Scotiabank Giller Prize winner and former Canada Reads celebrity guest, Will Ferguson, proclaimed, “Canadians rejoice! Our Vonnegut has finally arrived! Morgan Murray’s debut is a great, brawling, sprawling, muscular glory of a story. Funny, dark, and wholly original.”
Murray has previously appeared at the THIN AIR Winnipeg International Writers’ Festival, Word on the Street Toronto, and the Cabot Trail Literary Festival. He is scheduled to appear at the ImagiNation Writers’ Festival in April 2021.
About Dirty Birds:
In late 2007, as the world’s economy crumbles, the remarkably unremarkable Milton Ontario – not to be confused with Milton, Ontario – leaves his parent’s basement in Saskatchewan and sets forth to find fame, fortune, and love in the electric sexuality of Montreal, to bask in endless Millennial adolescence, to escape the infinite flatness of Saskatchewan, and to find his messiah: Leonard Cohen.
About Morgan Murray:
Morgan Murray grew up on a farm near the same backwoods central Alberta village as figure-skating legend Kurt Browning. He now lives in the backwoods of Cape Breton with his wife, cartoonist Kate Beaton, Mary the baby, Agnes the dog, Reggie the cat, Peggy the ditch kitten, and six chickens without names because they all look alike. In between, he has been a farmer, a rancher, a roustabout, a secretary, a reporter, a designer, a Tweeter, a tour guide, a schemer, a variety show host, and a student in Caroline, Calgary, Paris, Prague, Montreal, Chicoutimi, and St. John’s. He has a BA in Canadian Studies from the University of Calgary, a certificate in Central and Eastern European Studies from the University of Economics, Prague, a MPhil in Humanities from Memorial University of Newfoundland, and a participation ribbon for beef calf showmanship (incomplete) from the Little Britches 4-H Club, Caroline, Alberta. His writing has been rejected by some of North America’s top publications, and has appeared in a bunch of other places like The Scope, The Walrus, Newfoundland Quarterly, and Echolocation. His short story “KC Accidental” won the Broken Social Scene Story Contest in 2013, and was anthologized in Racket: New Writing from Newfoundland in 2015. His first novel, Dirty Birds has gotten him compared to Kurt Vonnegut, somehow.