Artist Patty Chapman wants to get people playing and creating 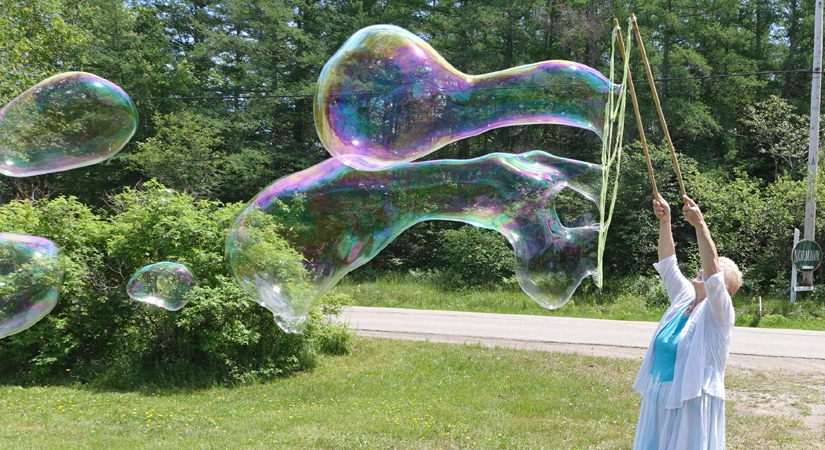 “We don’t spend enough time playing!”
Those sage words belong to part-time philosopher and full-time artist Patty Chapman.
She recently moved to Margaree Valley from Barrie, Ontario, and on Friday, she held the grand opening of the Waxdreams Play Emporium.
“My idea is to make an art centre in the community, but more than that, I want to create a place in the community for people to come and play,” she said.
As an artist, Chapman works in three media: acrylic, pyrography (a fancy word for wood burning), and painting with wax, or encaustic iron and stylus.

After losing her husband to cancer, she came to Margaree Valley to join her sister and father in their home on the East Big Intervale Road, near the Egypt Road turnoff.
She purchased the encaustic iron and stylus, an art form that originated in England more than 30 years ago. She believes she is the only one working and teach in that medium in Canada.
“After my husband died, it was time to start creating again. I started painting the minute I got the iron and stylus,” she said. “That sense of stress I had during my husband’s sickness was gone – and I had stress!”
With her new studio and Play Emporium, Chapman says she hopes to continue teach that form of art as well as let them be creative.
Estimating that she has taught more than 5,000 students in her lifetime, Chapman says she laughs when people tell her they are not creative.
“I’ve had people tell me they can’t even draw a stick man. After one lesson you can see the change in people who said they weren’t creative.”
Along with her paintings and wood burning creations, Chapman also makes bubble wands – a macrame netting connected to two bamboo rods. And if you think you know bubbles, then you’ve never seen the bubbles she can make with the wand.
She sells them from her studio, along with the recipe to make a perfect pail of bubble soap. It includes agar powder, rubbing alcohol, baking powder, and Dawn dish soap.
Coming soon to her studio is a spin pit – a delicious-sounding way for someone to get extremely messy making spirograph-like designs from a spinning container of paint.
“I want to get people juiced up everywhere!”
Her hours are from noon to 5 p.m. daily, but she said she is also able to open for two hours in the morning to anyone looking for private lessons.
You can reach Chapman by phoning 902-248-2939.