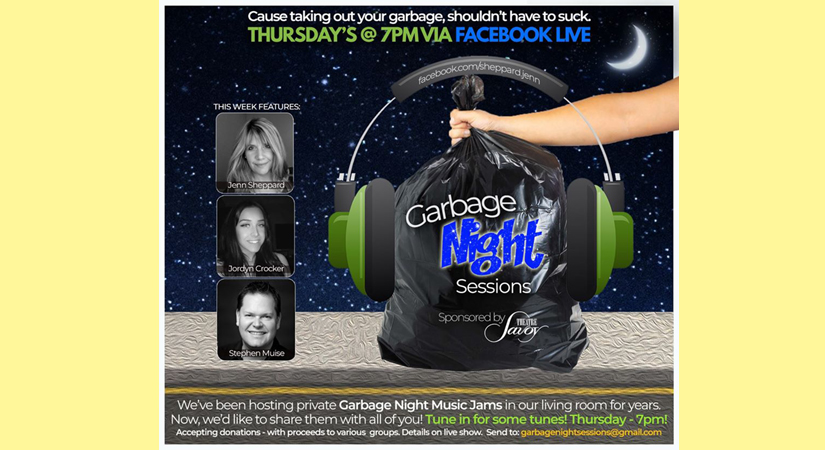 “We always have a Garbage Night party at our house. Which is a music jam before we take out the garbage. We’ve been having them for years. Last week, we decided to put one online. We’ll do it again this week, on Thursday, at 7:00 p.m.”
It may not sound like it, but that’s how Cape Breton musicians Jenn Sheppard and Steven Muise are coping with the loss of income and work due to the restrictions from the COVID-19 pandemic.
Sheppard and Muise, along with Cape Breton musicians Kimberley Fraser and Aaron Lewis, are four musicians who have been trying very hard to adapt to the changes and the challenges brought on by this coronavirus.
With so many gigs cancelled and their calendars virtually wiped clear for the coming months, they’ve tried to be innovative and come up with ways of keeping people entertained and earning a little money online for themselves and their fellow musicians and industry peers.
Kimberley Fraser described to The Oran how their gigs and their livelihood was suddenly washed away in a period of less than two days.
“First of, Aaron and I had a St. Patrick’s Day gig that was cancelled. We also play a lot for the cruise ship passengers. We have a show called Spirit of the Fiddle that is actually an excursion for passengers who go into Sydney to the Joan Harris Cruise Pavilion. Cruise ship season starts the beginning of May and the entire season is nearly half, if not half my income for the entire year. When this started happening, we could kind of see the writing on the wall.  There were already a couple of major cruise lines who were cancelling their cruises and then the Port Authority announced that the season would be closed for at least May and June. That was the first hit. Then the next day, all of our local gigs were cancelled. I would say, three to four months of work evaporated and we had a show booked at the Membertou Trade and Convention Centre and they just closed.  Aaron had a few local gigs cancelled with his bands and it all happened like a Tsunami,” said Fraser.
Sheppard described a similar feeling.
“I think we’re all feeling the need to reach out a bit. Our calendar was swiped clear for at least the next few months and that makes things a bit scary for everyone. But we’re coping. The online concert we gave really gave us something to focus on. We enjoyed having everyone tune in to be together. We felt the love...not just for the live music, but for the magic made when so many people come together to share in something. Anytime we looked at the live comments, we saw people chatting to each other ...just like at a real party. We’ve lost our gathering spaces for awhile and I think we’re all going to find out how much we miss those places and being able to be near other humans. Not just musicians...humans. Period,” Sheppard told The Oran this week.
These four Cape Breton musicians have been working closely through the Cape Breton Music Industry Co-operative (CBMIC) in administering the funds they are raising through the online concerts.
Kimberley Fraser told The Oran she is working to move most of her private lessons over to FaceTime or SKYPE. The online income was part of Fraser’s income but now she is trying to have it grow.
Aaron had a weekly gig at a restaurant in Sydney.  So, for the final gig he posted a one-hour live post on Facebook and he had over 100 people on there.
“So, we took it one step further and decided to do a Facebook Live St. Patrick’s Day gig with friend and fellow musician, Buddy MacDonald. We know that the music industry as a whole is hurting and we were thinking about the tech people, folks that can’t just go online like musicians, so we thought we’d donate a portion of the concerts towards those people through CBMIC (Cape Breton Music Industry Co-operative.) We thought they would be a good organization to run this through.  As musicians, we are fortunate that we can still offer our services online,” said Fraser.
Fraser and Lewis are offering their Concerts in Quarantine Series and they’re going to try to keep it running on Tuesdays.  Their next scheduled guest was pianist and dancer, Mac Morin. They also have a sponsor with MacDonald Kia.
Music has always inspired Cape Bretoners to go the distance and Sheppard no doubt feels that inspiration.
“I think we should all use technology when we can to stay connected in positive ways. We FaceTime Wii bowled with our neighbours last night.  It was awesome...and not much different than when they would come here to do it.  Our teenagers were amazed when they saw what we were doing. They never thought of doing that! We can do this. We just have to stick together, use our heads and our skill sets to help each other out. Live concerts give everyone something to prepare for; a schedule to adhere to. We’re missing that these days. So, if these concerts can fill that void – let’s flood the web,” Sheppard concluded.