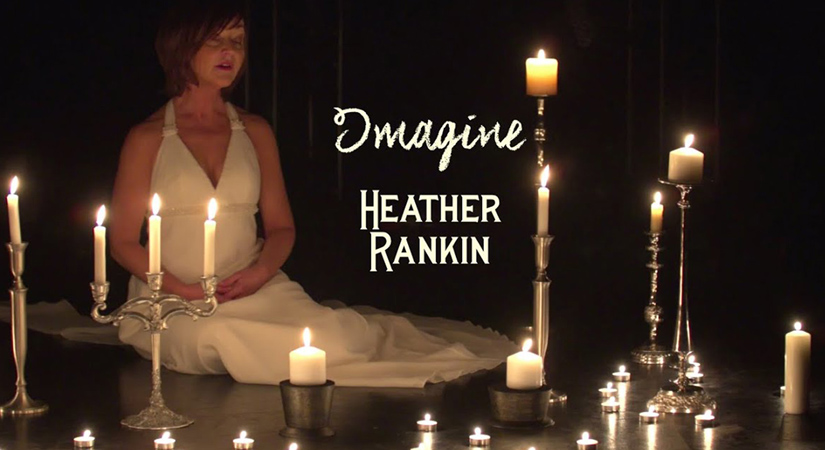 Heather Rankin, best known as the youngest member of the Juno Award winning and multi-platinum selling Canadian band The Rankin Family, released the third single from her seasonal album of the same name, John Lennon’s
“Imagine,” with a music video directed by Thorn Fitzgerald.
“When I set out to make a seasonal recording, I immediately thought of John Lennon’s Imagine,” said Rankin. “It is the kind of song that songwriters want to write: a simple lyric with a poignant message that resonates strongly with the listener. It seems especially apt to me during the holiday season, when folks are taking a little more time to reflect, to open their hearts to others, and to consider the future. I have always been a dreamer, and I’ll never stop dreaming of a world that is more generous, accepting, inclusive, loving, and peaceful. To me, this is what the holiday season is all about.”
The music video is produced by Doug Pettigrew of Emotion Pictures, and along with Rankin, features a myriad of women of different ages and ethnicities contemplating the timeless lyrics of ‘Imagine.’ The song was written in 1971, and in 2017 Yoko Ono received co-writing credit on it, citing a December 1980 interview with John Lennon where he said “Imagine” should be credited as Lennon/Ono song. Although Rankin is not the first woman to record “Imagine,” it felt serendipitous that her rendition was released the same year that Ono’s contribution to the song was finally acknowledged in an official capacity within the music industry.
Rankin is a singer, songwriter, and actor. As a solo artist, she has released two albums, A Fine Line (ECMA/ Juno nominee) and Imagine (ECMA nomination) Her music video for “We Walk As One” (directed by Scott Simpson) was nominated for ECMA’s Fan’s Choice Video of the Year and her music video for “Titanically” (directed by Thorn Fitzgerald) was nominated for ECMA and Music Nova Scotia Awards for Video of the Year.
Rankin has taken her solo show to venues across the country; including headlining the Lunenburg Folk Harbour Festival, hosting Songwriters’ Circles at ECMA Week, performing at the Nova Scotia SummerFest in Antigonish County, most recently performing with the Cape Breton Orchestra at Celtic Colours, as well as performing with Symphony Nova and with the Calgary Philharmonic.
She has also teamed up with Nova Scotian powerhouses Bette MacDonald, Lucy MacNeil, and Jenn Sheppard to create Island Girls; a unique comedic and musical salute to Cape Breton.
Rankin was nominated for a 2019 ECMA for Fan’s Choice Entertainer of the Year. In 2017, she was named a Canada 150 Ambassador and took part in the Canada C3 Expedition on Leg 2 between Montreal and Baie Comeau, where she co-wrote the song “River of Nations” with Alex Cuba and Andrea Menard.
Rankin has recorded and performed with many artists including The Chieftains, Johnny Reid, and Carly Simon. In addition to touring, she has been in the studio working on her next album, which will be released in 2020, and is influenced and inspired by her Celtic and Folk roots.