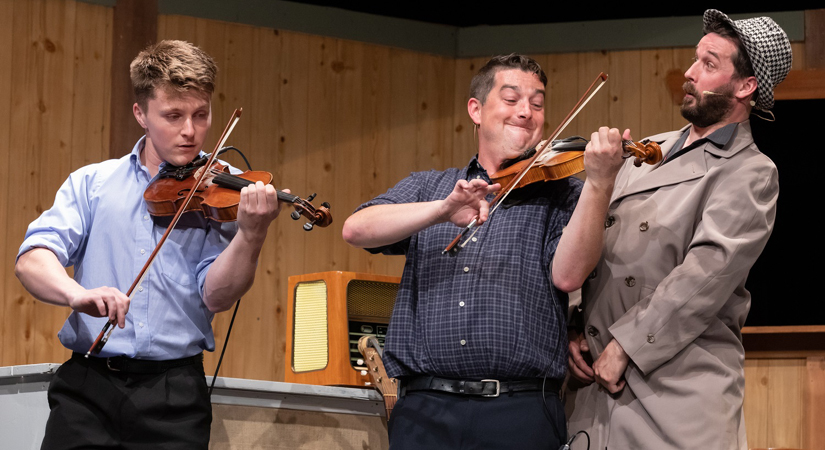 Taken during the production Gélas et la Mi-Carême, there was some great music and acting by Douglas Cameron, Colin Grant and Ryan Doucette. Photo by: Michel Soucy.

Le Conseil des arts de Chéticamp offer a diversity of activities through out the year. This summer, there were two primary productions; that of Adèle et Léo and most recently Gélas et la Mi-Carême, which was presented July 31st and August 1st to the 3rd at La Place des arts Père Anselme Chiasson at École NDA School. Approximately 800 spectators took in this show, featuring some characters that are no strangers to the Acadian region, all-time favorites, that certainly did not disappoint the crowd in this humorous musical.
This play, centered on La Mi-Carême, offered visitors a taste of this phenomenal tradition and, of course, a teaser for those who look forward to next spring when they take their costumes out.
For those of you not familiar with this term, La Mi–Carême literally means the middle of Lent - the third Thursday of the 40 days of fasting and penance for Easter. It is an ancient tradition developed in France to give everyone an opportunity to celebrate and escape his or her Lenten duties. This celebration remains a vibrant living tradition in several Acadian regions of Eastern Canada. In our county, Chéticamp, Saint-Joseph-du-Moine, and Grand–Étang, in Fatima on the Magdalen Islands, and in Natashquan, and Pointe-Parent in Quebec’s Côte Nord region, the annual Mid-Lent outing is a rich tradition that has survived since the arrival of the first settlers. On Prince Edward Island, in the Tignish and Palmer Road parishes, a number of families have kept alive another tradition:  the annual visit of the mysterious Mi-Carême a mythical (female) figure who brings sweets to well-behaved children.  These communities have maintained traditions of French origin formerly known throughout Acadia as well as in a number of regions of the Province of Quebec.
This is a fun custom that takes place annually in our Francophone region, but there are various ways that this custom is celebrated. For instance, in our county, we have approximately 20 houses/associations who host La Mi-Carême. Some let them into their basements, garages, or kitchens. We have Le Centre de la Mi-Carême, Le Foyer Père Fiset, La Porte Verte, Les Trois Pignons, École NDA School and the list goes on. They anxiously wait for the arrivals of the masqueraders. Some are open morning, noon, and night. There are many who choose to be in the role of the “watchers” who try to guess who is under the mask. The food/goodies, especially sweets, Tamarin (hard taffy) and fudge, are ready and music, whether live or recorded, will be playing, which encourages everyone to dance a jig or two. What was once celebrated by our ancestors but for one day, the Thursday, has become an entire week. Various houses can see up to 1000 Mi-Carêmes during the festive week.
To the delight of many, the musical Gélas et la Mi-Carême reunited the funniest of characters, Gélas played by Alexandre Poirier and Alphonse, played by Ryan Doucette. With these two very talented comedians on stage, it is bound to be a riot and have you laughing in stitches. They brought back special memories of past productions involving these two humorists throughout the musical. The storyline was based on the scenario that there is a thief in the community of Chéticamp, but Gélas suspects that the villain may be dressed as a Mi-Carême. His mission is to find the thief and put the matter to rest. Add to the mix, many other gifted actors, singers, dancers, and musicians, it made for an incredible show filled with vibrant colours, spontaneous action and relentless energy.
This production, although enjoyed by the audience, was also a great experience for the actors and musicians involved, “We had special moments during these presentations. To be able to work with an exceptional coaching team with Ryan Doucette, Luc d'Eon, and Colin Grant, we knew this show was going to be awesome,” says actress Lilianne Cormier.
Executive Director Le Conseil des arts de Chéticamp Joeleen Larade expressed, “These comedians did an incredible job of performing and entertaining the crowd.” She added, “We are thankful to our partners who made this project possible: Destination Cape Breton, The Municipality of the County of Inverness, Canadian Heritage, La Société Saint-Pierre, CSAP, the Ministry of Culture and Heritage of the Province of Nova Scotia.